Hello everyone! My name is Connor and I have just been added to the team. I am a 3D Modeler, but have limited experience in both Python and C#. I do intend to learn more programming in the near future so I can be part of both the Graphics and Programming teams. I have already created low res models of all the necessary internal Organelles, including the endoplasmic reticulum. 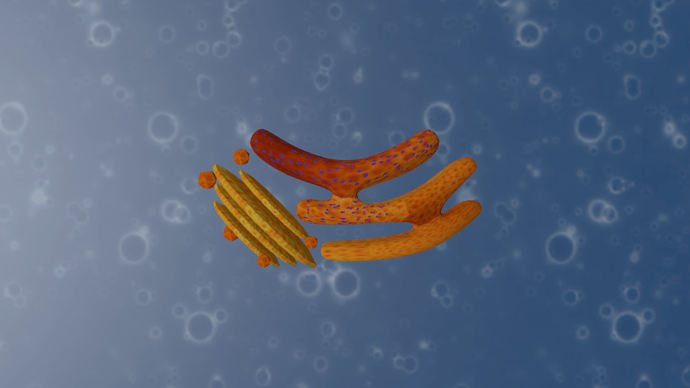 This is a rough version of what I expect the Golgi Apparatus and Endoplasmic Reticulum will look like in game. It obviously needs cleaner textures and the Golgi Apparatus needs to be subdivided, but doing the latter would put the poly count well over 1000.

This short video is just a render of a low poly cell I animated, it includes a nucleus, vacuole, 2 mitochondria, and 2 chloroplasts. All of the organelles are fully animated and have low res textures.

Also, for anyone interested, here are some links for a game I made when I was 16, Stickaboom.The first link is the game itself, the second is a cheat version that unlocks everything for you from the start.

Dropbox is a free service that lets you bring your photos, docs, and videos anywhere and share them easily. Never email yourself a file again!

Dropbox is a free service that lets you bring your photos, docs, and videos anywhere and share them easily. Never email yourself a file again!

Please let me know if any of the organelles I have started have already been made, that way I don’t waste time optimizing their textures and meshes.

I look forward to meeting everyone else on the team!

I don’t think the forums like my video, so here’s a link to it in my dropbox.

You could put it on youtube, then we can also add it to playlists of prototypes or whatever too

I think the low poly-count on the golgi there is alright – it’s very crisp and easy to recognize (which is important), but maybe I just like the art style. It definitely has more personality than a lot of the other models people have made for us (though of course, they’re generally aiming for realism, which we, without a unified idea on art style, usually had as our only constraint).

So I guess, given that we haven’t thought much about organelle art style, once you manage to start exporting and viewing models in Thrive, I for one would be curious to get a comparison between, say, a more vibrant style like that model above, and something more blobby and realistic – we won’t be able to decide which we want unless we can see the difference.

Thank you, I took a lot of inspiration from spore, which is why it’s so vibrant. Perhaps I went overboard on the colors, but I wanted a clear distinction between the rough and smooth ERs, as well as between these two and the other organelles within the cell. As far as I know, yellowish orange is not really used by any other organelles, chloroplasts are green, mitochondria are burgundy, and nuclei are purple (I think).

I can make another, more realistic one if need be, tone down the colors, put more folds in the ER. But when I made this I took into account the fact that these two organelles are only going to take up 3 hexes, so too many tris will take away precious memory from other game aspects, with very little change to the overall look of the game. I honestly had second thoughts about subdividing the ER.

I don’t know, I guess my thought was although this game is aiming at being more realistic than Spore, it’s still a game. I don’t think our players would care too much if the organelles weren’t realistic, they might even appreciate vibrantly colored organelles over realistic ones.

If you don’t mind lower poly models, here’s the two organelles before subdivision: 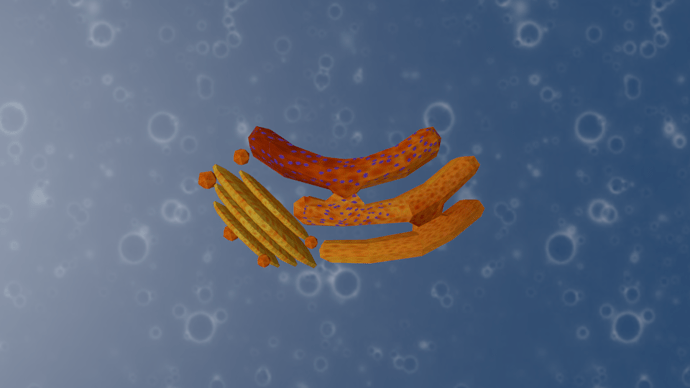 And here they are both subdivided 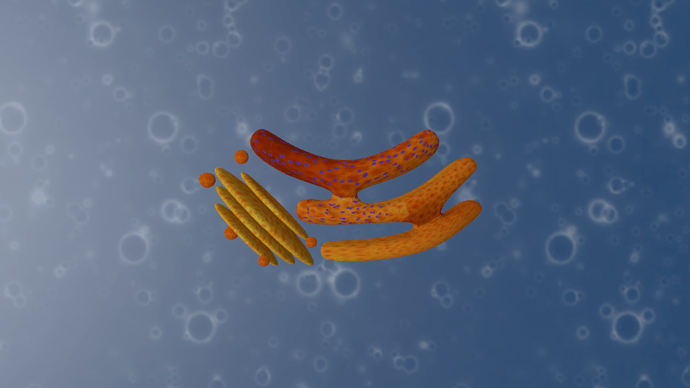 The first image, of course, is the ER subdivided and the golgi left untouched. Let me know which of the 3 you like best, also, I can rework the textures if they’re too fruity.

Great to have you on the team Connor! I think your models look really good. In particular, I really like the bumpy, rough textures on the ER. If I had to be nitpicky though, I’d suggest giving the golgi a bit more fluidity and curviness so it’s not just straight lines, but it looks great as it is well.

You should definitely not tone down the colors. If you look in the organelle models thread you can see the other organelles we currently have and they are all very bright and vibrant.

Finally, I assume you’re already part of the slack group? If not, you should probably message moopli and give him your email.

It is curvy, albeit hard to see. I admit it didn’t come out how i intended, but every image I’ve ever seen of a golgi has been a 2D sliced version. From those I could gather that the golgi was made of several concave disks and blobs. The problem is you can’t see how the disks cave in because they are stacked so close.

These are the images we are all accustomed to 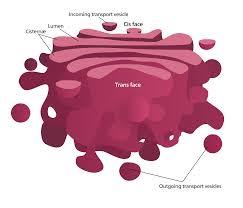 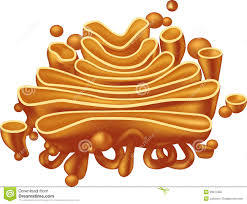 But these don’t give all the information needed to make a 3D model, I could only assumed that the top, unseen part of the golgi is just a mirror image.

This is the only 3d image I could find of the golgi, and what i based this model off of 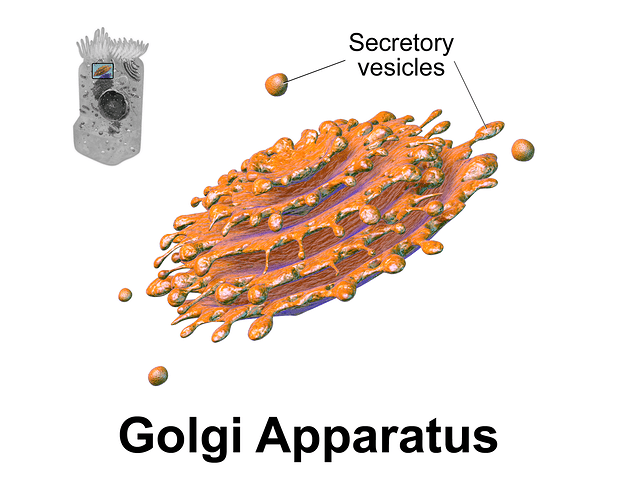 I also found this image, which seems more like what we would want to see in game. 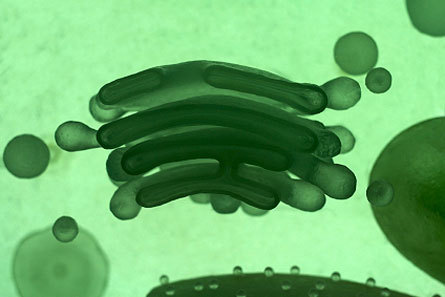 This one, like the first two, is a sliced version, and doesn’t show the top side of the golgi.

Ok, I reworked both meshes and cleaned them up, This version actually has less tris than the original. 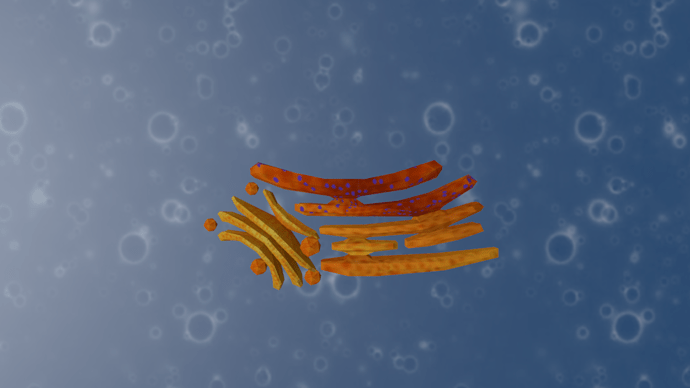 Here is is subdivided, looks a lot prettier, but this will kill performance, and again, it won’t be too noticeable, so I prefer the former image 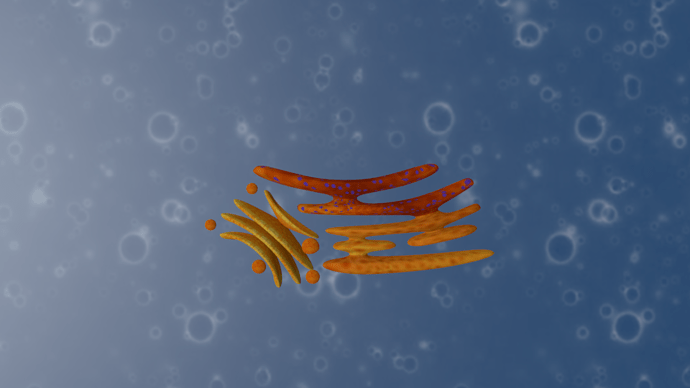 One note I will add, although we can all agree the golgi looks better like this, I don’t think it’s very accurate, the golgi is more like stacked bowls and less like stacked bananas, but bananas look better, so I settled for bananas.

The new Golgi and ER look great. You’re right that they do look like bowls in real life, but keep in mind that organelles are transparent, so when you look at them sideways you only see the outline. Secondly, because cell membranes are very flexible, they often face both ways as can bee seen in your pictures. Now, if it is not too hard, can you export these as two meshes into the Ogre format so that I can add them into the game? If you rendered these in Blender internal, you should just be able to export them, but if you used cycles you will need to UV unwrap it first and then bake the textures.

Now, if it is not too hard, can you export these as two meshes into the Ogre format so that I can add them into the game

I can export them for Ogre, but you mentioned you wanted me to animate the other organelles to float around, do you want me to do the same to the Golgi?

Yes, do the same for the Golgi Apparatus, so it is clearly visible that it is not part of the ER (although in your model it is hard to mistake them). As for the animation and exporting part, I assume @crovea would better explain it than me. I think there was a tutorial on this somewhere on the old forum…