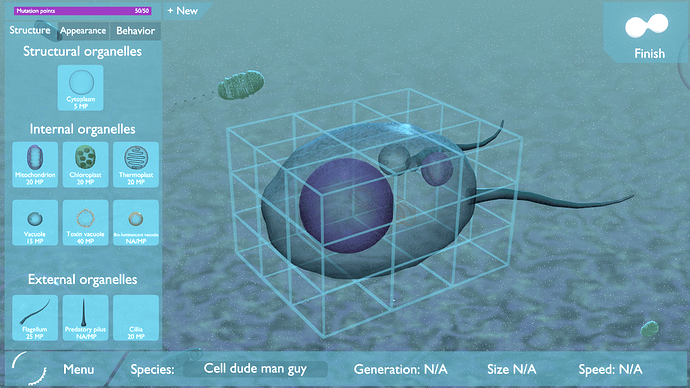 Ok so this is a piece of concept i made on based on Atrox’s idea on what a 3d microbe editor would look like.
Personally i think it would be neat to make the microbe stage 3d.

This is a very nice concept image.

The idea that the microbe stage will be 2D has been fixed for a long time and a lot of work has been built around that. I think it would be quite a challenge to change that now. Do you have any particular reasons for thinking having it in 3D would be better?

Well for one, there was a point made that it would feel slightly if not quite less limiting, it could allow for more movement and a feeling of a much larger and grander environment. it might allow for some more interesting cell designs too considering you can build in all directions. and if that might be too hard to accomplish it could still remain 3D, but the gameplay could be the same as the 2.5D one but with the camera angle slightly tilted so that the 3D is more visible and pointed out, while the editor could still remain fully 3D.

Changing to a 3D Microbe Stage has been suggested many times, but as @tjwhale said, all our existing mechanics and the engine are built around a 2D movement style, at least initially. Compound cloud diffusion in three dimensions would be considerably more difficult to program in 3D, for instance. So while this is an impressive-looking concept, unfortunately it’s unlikely to influence the game design much.

I do like those bacteria(?) though. Were you planning to do more work with them?

Yes, those are bacteria. And i tried to suggest if they could be implemented into the game as sprites (yet of course everyone ignored the suggestion). i even sent the bacteria model to @Nanu if i remember correctly? but i got no response.

Though, we do have to make a decision about how the initial transition to multicellular works. It’s been decided that it will be in 3d but what about compound clouds and other things like that? So the late cell stage might actually make a lot of sense to be in 3d.