Hey guys, sorry for my long leave of absence. As I made known before my disappearance, my computer was having trouble with Blender Cycles, the reason being my motherboard was fried. So while I save up to repair my computer I broke out my old desktop and installed blender.

But enough of that, that’s not what this thread is about. Ive noticed recently there’s been a push to redo the Thrive’s user interface, and I thought that now would be the perfect time to have a discussion on a universal art style. I’m going to assume most of our team are gamers themselves, and most of them know that one of the biggest turn offs for a game is conflicting art styles, but one of the biggest hooks so to speak, is a unified and unique art style. I believe that for Thrive to be successful we need to have a serious discussion on the style of our environments, organelles, and user interface. As of right now, our ui doesn’t fit in with the rest of our game, which is why we’ve taken steps to redo it.

But what’s more troubling is our organelles, currently were using some of my own organelles and some of @TheCreator’s organelles, and the difference in art style is very noticeable.

As we move on to creating new biomes for the microbe stage, we must also keep this in mind, if our hydrothermal vent biome looks hyper realistic and our shallow waters biome looks like a Pixar movie, people will notice the conflicting a art styles.

As for my opinion, I think that while realism is important, that aesthetics far outweigh realism when it comes to games. We don’t want to go overboard like spore, but colorful and pleasing biomes/organelles would be much better at attracting normal gamers.

Please leave any thoughts or opinions below, this thread was made so the whole team could agree and come to a conclusion on how our game should look.

Defintely, also I don’t have any organelles

The nucleus was @Atrox’s (I think) doodle of how a cell should look like, and since that was the only nucleus I had, I just cropped it out and added it in the game.
As for the art style, we are aiming for realism in shape and texture, but adding our own vibrant colors to the mix (since most microscopic life is transparent and would be boring to look at).

Oh, and welcome back!

Probably not the right thread for this, but maybe we should start with making concept art of the organelles before people start modelling? So we can all agree upon a design that modelers can strive for?

Like perhaps there should be a process to the whole visual thing?

I vote for that style^

In all seriousness, we don’t have enough people for an actual art workflow. In an ideal AAA company we would have say, you (Atrox) draw concept art, threecubed create models, and Nanu texture them. This way we would be able to create new organelles and other assets much faster and of a better quality (since everyone is doing what they do best).

We should do that, have threecubed send me meshes and I can create materials for them, it would work great.

Yay I can actually have a consistent role in the team!!

I’d like to mention this is something that has been discussed before, and while it was years ago on the old forum, it is still slightly relevant here.

This was the eventual decision:

So the consensus is reached on the point of making a simulator with sc-fi art elements.

The reason I asked this question is, that the art style doesn’t juts boil down to in-game graphics, but also, as Noitulove mentioned, relates to concept art, menu style, music style, ambient sounds, trailer style, font style, etc…. (all the little details)

If we establish a guideline to what type of art promotion and visual representation we want in early development stage, then the actual product will be easier to achieve and the art style will be solid which will, in its term, bring a unique atmosphere to Thrive.

While that’s not terribly relevant to the Microbe Stage, we also have this concept video, which in my opinion should serve as the basis for the stage’s art style. It seems with all the transparency stuff you’re approaching that anyway.

I love it, that’s exactly what I had in mind when I made the new organelles.

I like the the simple, one-color cells and organelles, though it’d be basically impossible to identify things unless they all had distinct shapes. It’d probably be difficult to pull off, but it’d look amazing if we could.

I like the idea, but there is the problem you mentioned of being able to tell organelles apart. Also, certain organelles like Chloroplasts are dependent on the star and atmospheric composition of the planet, thus the color of them would be uniform for all cells.

I could try to see what I can do, maybe I can make a grayscale png with alpha and overlay color that could be assigned to a slider in Ogre.

Making meshes with dynamic coloring is another obstacle entirely

Since we’re discussing the art style here, what should organelles be shaped like? Or will that be done some other way. Also is there any models I need to make for this or need to do?

Mitochondria should be pill shaped, vacuoles should be roughly spherical, chloroplasts can be either pill shaped or spherical, preferably a mixture. The rest have distinct shapes that shouldnt be changed, just look up images of the organelles as a basis.

Alright, should I just try to make renditions of the various different organelles for when we implement grid or for variety sake?

[quote=“Nanu, post:11, topic:210”]
Chloroplasts are dependent on the star and atmospheric composition of the planet, thus the color of them would be uniform for all cells.
[/quote]Not necessarily. A star would actually allow for a range of photosynthetic organism colors. Our star can support green, purple (the original photosynthesizer on Earth apparently), and red photosynthetic life. I think there’s also brown algae that photosynthesizes as well.

(Isn’t there some examples of Red Photosynthesis here on earth? More specifically plants with red leafs or red-is how leafs? Like a cherry blossom?)

How would we determine the color of the chloroplasts though? Would it be randomly chosen or based on the environment as a whole?

Yeah I included red up there. There’s also red algae.

This chart helps. Basically the way it works is you look at the peaks in each line. The higher the peaks, the more absorption, the less likely it is for a plant or algae or photosynthetic organism to adopt that color.

Phycocyanin, for instance, has the highest absorption in the orange wavelength. This would mean it absorbs orange light the most, The lowest points on the phycocyanin line fall in the red/magenta wavelength and the blue wavelength. Using this information, one can infer that plants or algae with phycocyanin would most likely be magenta or cyan. Guess where we find phycocyanin? Cyanobacteria, the bacteria that made Earth the oxygen rich world we live in today. 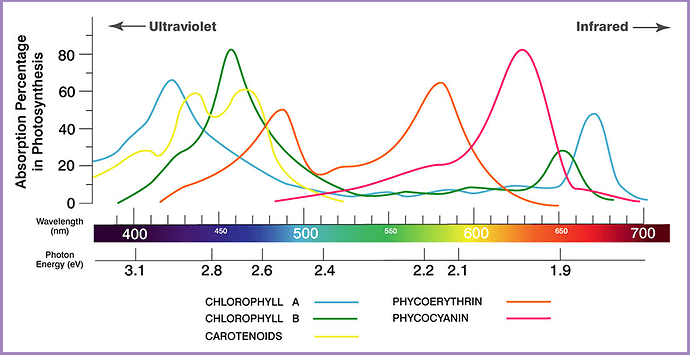 EDIT: If we could find a way to create our own pigments (maybe with the slider grid) we’d be able to fully customize our chloroplasts.

Red is a common colour for species which live in the shade of green photosynthesizers.

And note, the chart is for absorption, which is more useful when you want to consider multiple pigments in concert (eg, chlorophyll with lots of phycoerythrin for those red organisms).

We do eventually want to have pigments which will be modeled for exactly things like photosynthesis; and the pigments would be converted to colours for rendering. We got part of the way there with our (mostly tjwhale’s) work on sky and star colour.

This is a bit confusing but I get it, pretty interesting to see, shouldent it be that the higher the wave length the better the chance it is? (After all Green Photosynthesis is green for a reason right?) I’m kinda worried we’re getting off topic a bit but I guess this is important for plants (and thus by extension the player)

Well this is the art style thread, so maybe a photosynthesis thread or something.