I had another go at using Curl Noise to approximate fluid flow. I have been following this paper somewhat

Basically a grid is generated and at each point a noise value is obtained (just a scalar value). Then from this noise the fluid flow vector field is derived (just by taking the curl) and so you get turbulence over the whole grid. My noise is crappy (just a function like sin(x*y) so bear that in mind).

Then a mask is added on top which is by default 0. When the mask is 0 you see no turbulence but when the mask is non-zero you can see through it to the turbulent layer underneath. As the microbes move they leave a trail of high mask values behind them (proportional to their speed) which is why they have a turbulent trail.

This implementation (code in the the prototypes repository - marked aug15) is stupid in that it generated the turbulence everywhere whereas it would be much more efficient to only generate it where the mask is non-zero. Anyway what do you guys think? Is this the sort of thing you are imagining with fluid flow?

Fantastic job! Sorry for taking over a week to reply, I’ve been on vacation. Overall, I think your prototype looks great—the most turbulence is located right behind the moving balls and it slowly diminishes as it gets farther away. I also really liked the part where the paths of the two circles crossed. I do, however, have a couple questions:

First of all, the turbulence behind the ball is located in almost a straight line, while in nature it would diffuse, creating a sort of cape behind the moving object. Is this a limitation of the algorithm you are using, or is it possible to fix it? I believe changing the water flowing path into a triangle would greatly add towards the realism.

Second, in the video you showed, are the moving cells at all affected by the created vector field, or is it purely cosmetic?

Regardless, I think adding this to the game with a decent shader would be fantastic.

Dude take your time with all this stuff, this is a long project, there’s no rush.

One thing to remember is if you add the same vector to everything you won’t be able to notice it. It will basically be a Galilean transformation.

When I get a chance I’ll do a more conventional fluid setup and see how that looks.

@tjwhale: I am going to go ahead and commandeer this thread if you don’t mind. With the membrane more or less finished, I am moving on to the next most pressing graphical “issue” in Thrive. Namely, the unrealistic compounds and lack of a fluid simulation. Drawing inspiration from the above work and a couple research papers, I came up with this:

This just looks awesome (well, to me at least). Anyway, after spending a couple of days working on fluid simulations for Thrive and a good way to represent compound clouds I think I finally got somewhere.

So far I have:

What I have not done:

What I am going to do know:

And now for the video that you’ve all been waiting for I’m sure (This time in HD):

That is amazing. I love it.

A simple way of doing a wake is just to have the microbes add to the noise in the place that they are sitting in. Though that will give a straight line rather than a wake.

Thanks! I’ve tried using the iso-contour option, but that didn’t really seem to work. However, I must have skipped over the noise 0 at boundary part, so thanks for reminding me!

In the paper they were saying it doesn’t need to be 0, just that it needs to be constant (if you want the fluid to slip by (non-penetration boundary condition)).

Also I love what you’ve done to keep the cloud together as a cloud, looks very natural.

I think, aesthetically, we might want the noise to be in a higher octave. From what I was imagining when I suggested curl noise, I thought the diffusion of a cloud could look like dozens of thin, twisty wisps of compound streaming out from the center, rather than one large blob streaming along. You’d need to go 2 or 3 octaves up for that kind of behaviour, but if we just go up one octave (like, double noise resolution) we might get something sort-of in the middle, where a cloud of compound splits along several nearby trails that still kinda stick together for ease of gameplay (if you want to keep the sticking-together behaviour), instead of one blob following one path.

Though that’s just my preconception, and this looks really cool, and would make for some very interesting gameplay.

Here’s another idea for an optimization: instead of using tons of points for a cloud, use a couple control points streaming along, and we can try using the ogre particle system (or hack together our own extension) to generate particles which move around those control points. If those particles move in twisty, random-ish paths, all the better, it could increase the apparent noisiness of the cloud’s motion much more cheaply than having orders of magnitude more points in each cloud.

And an idea for your prototypes: instead of having lots of points floating around to show the flow, maybe do something like what tjwhale did upthread, use fixed lines. And if you don’t add anything that changes the curl field every frame, then you can also make all those lines stay fixed the entire time it’s running. Lets you see flow direction, but reduces calculations so it’s easier to see how fast the actual compound-cloud computations are.

It looks really awesome, by the way!

Short progress report: Got everything factored into classes, will now transfer this to Ogre.

@moopli:
That makes sense, if fluids flowed around microbes then it would be impossible to absorb them. I was thinking more of allowing for things like rocks. Speaking of recalculating curl every frame, I actually did that in my first prototype and everything worked perfectly fine.

I tried increasing the octave count, but that resulted in a lot of clumping and unnatural and edgy boundaries. Even when I changed it from 6 to 7. Might be because of my implementation, but it looks really bad.

Using a few control points would be good, but what I have so far isn’t really computationally expensive. Eventually, I was thinking of using semi-transparent billboards to create realistic clouds, but a paticle system might also work.

I, personally, think its a lot easier to see fluid flow when there actually is flow instead of just a slope field. Plus, these points are always going to be there to simulate currents, even after I port it to Ogre (well, they’ll have decent looking textures such as bubbles and billboards).

Here’s a couple of images: 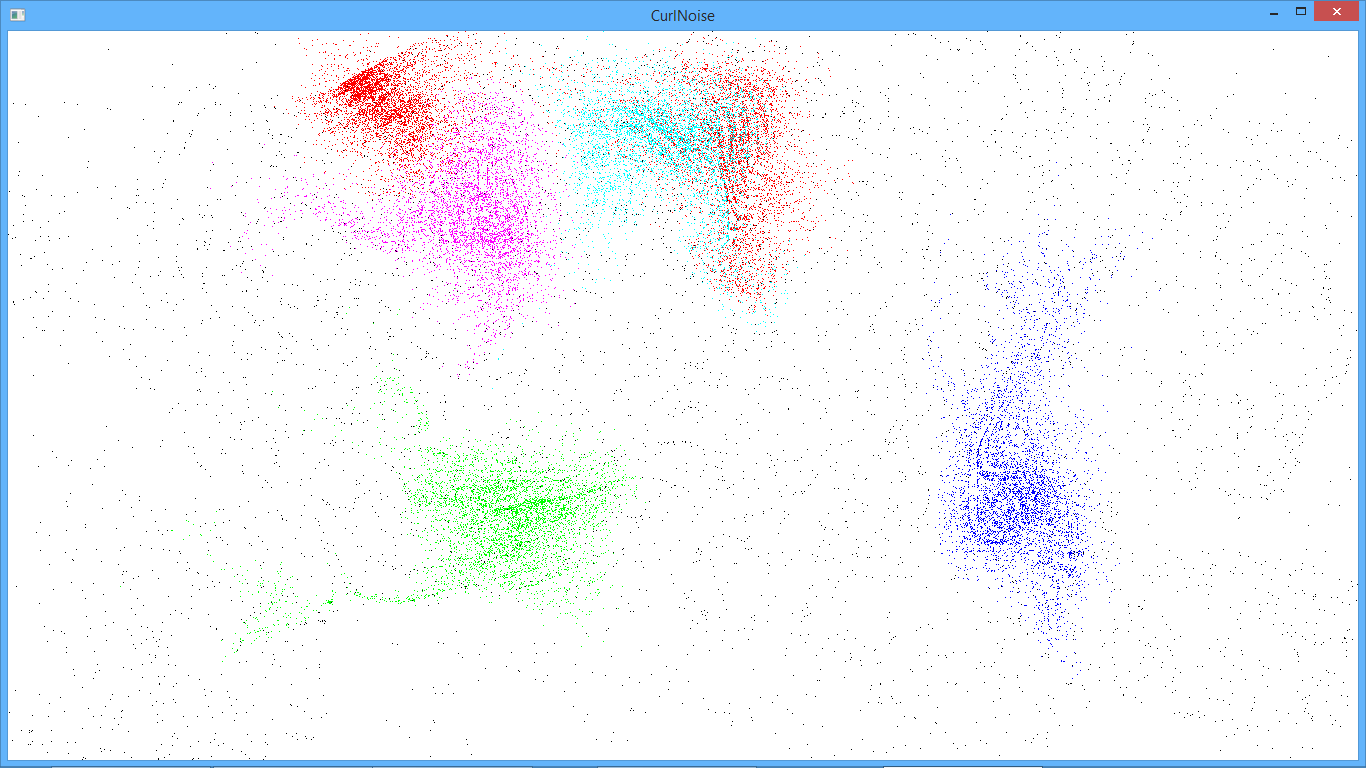 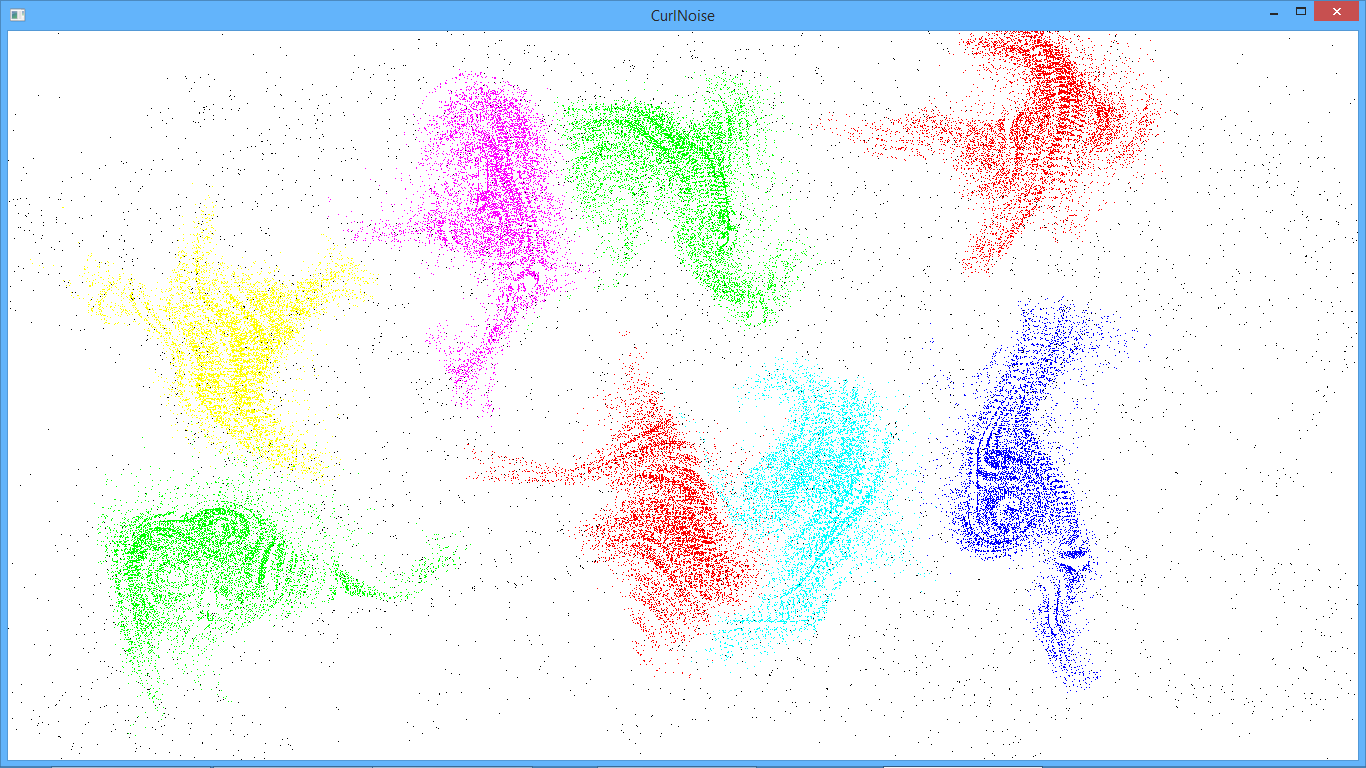 So I did some calculations and timing. A cloud of 5000 particles takes 0.01 seconds per frame (not counting the initial calculation of the velocity from curl). Thrive currently runs at around 60 fps on my laptop, which is around 0.0166 seconds per frame. Having one cloud in the game will come close to halving the fps, which is obviously not ideal. We could theoretically not re-calculate the velocity of every particle each frame, but this would be at most a 90% increase in speed and we would still see a significant drop in frame count. I am honestly willing to give the fluid sim/compound clouds/rendering combo at most 0.005 seconds per frame, which would give me 50 fps. Since we will be simultaneously getting rid of particle emitters as well, which currently clutter the fps, the speed would be even faster.

Let’s calculate this now. If we plan on having anywhere from 5 to 20 clouds on the screen, we can dedicate 0.00025 seconds per cloud. From the above measurement, one particle takes 0.01/5000 = 0.000002 second to move, so we can have 125 particles. Let’s round down to 100 just in case. That’s actually not a bad number for seed particles, now let’s see if we can use these to create realistic looking cloud motion.

Here is another video:

I finally ported my prototype code into Thrive. They are randomly spawned and despawned, and all the compound clouds (which are marked with the purple nucleus model) follow the same dynamic velocity field. I will now attempt to let AI microbes also absorb the compound clouds (right now only the player cell can) and give everyone compound points for doing so. Then I will work on getting good graphics using a particle system and, hopefully, we can release 0.3.1 before New Year.

Are you getting reasonable frame rate?

Not sure if it’s a good idea or not, I guess that can only be answered when we have some idea of gameplay. I do quite like the notion of drifting gently down stream.

The framerate isn’t too bad. I kind of went overboard with the amount of compound clouds and I didn’t remove any of the current compound emitters which significantly drop framerate and got 25 fps.

We could experiment with water currents for cells after I finish the clouds. In fact, I have a density parameter which we could use (so we can have the currents not affect the cells as much as they affect the less viscous clouds). Although, on the other hand, I don’t think there are too many currents at the scale we are talking about.

You guys ready for the Christmas release of 0.3.1? After working and failing with particle system for the past week, I finally got the effect I wanted, see below: 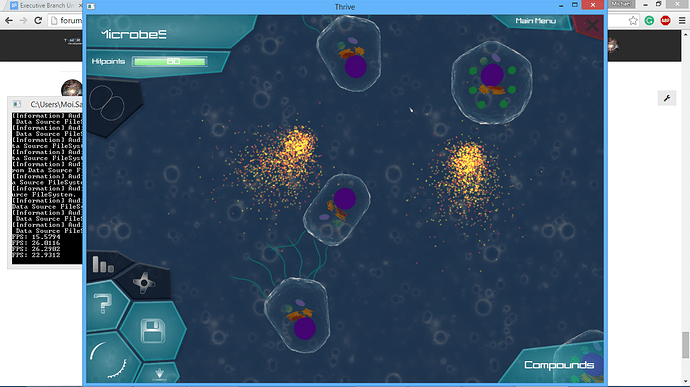 You know what the best part is? The framerate drop was extremely minor (3-4 fps), and I haven’t really done any optimization yet.

Fantastic work! Is it possible to make the cloud not all absorbed at once? So you “suck” up the compounds as you pass over them?

@NickTheNick: I’m not quite sure yet, but I’m working on it.

Here is a newer and better video, btw: