Should every membrane type be able to bind?

If some membrane type couldn’t bind, it would make it quite an useless choice, as the player would need to pick another membrane type to advance in the game.

Over the last days I have been sporadically working on a simple concept of how the very early multicellular editor might look. Since my concept shows the multicellular editor before the dimensional shift, I figured this would probably be the appropriate place to post it instead of in the „The Aware Stage and Mechanics“ Editor thread. 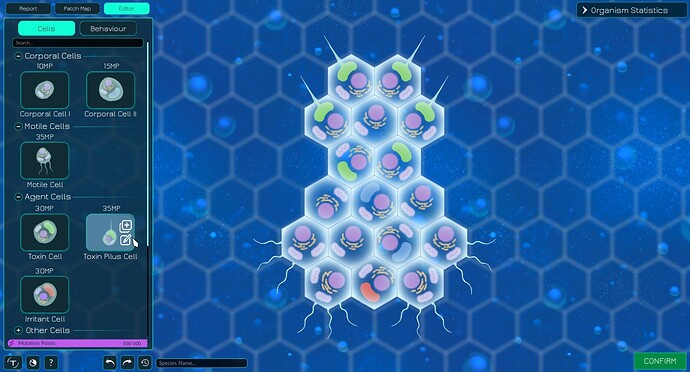 As there are up to 3 year old posts in this thread, my concept might not be 100% in sync with all of the ideas layed out above. But it seems to be largely congruent with the draft @Buckly recently posted in the „Cell Specialisation and the Dimensional Shift“ Thread.
I also included the copy and edit buttons posted by @Narotiza in the Aware Editor thread.
The icons for the cells on the left might be a bit large. Maybe there should be three in one row to make things more compact? I‘d apprechiate feedback about that specifically and about everything else in general.

I think we need to think some on what kind of creation abilities we are going to allow the player to have when they pass a certain variation of cells (3,5,8,etc) in this stage of evolution for their creature to introduce some more complexity to the game in terms of difficulty. Thoughts?

Overall I do like the UI and the editor design and feel we can keep it into later stages of the game until we possibly branch fully into a 3d editor if we are still taking that route.