Compound Clouds and the Early Game

We had a chat on the discord about how the new player experience is harmed by a lot of swimming randomly and starving, which while realistic to single-celled life, is not exactly fun. I’m not going to suggest any solutions on this, because I don’t want to jump ahead. Instead, I want to ask the team what we WANT out of the early game.

Right now, the early game, which I’ll define as “before the other species show up”, as suggested by our new tutorial, consists of:

I’m not saying it’s terrible, I’m just saying that, right now, that’s our game for the first few rounds. We’ve gotten feedback that steps 1 and 2 are too difficult and random, and there’s plenty we could do to make them easier. At the end of the day though, what is the challenge we are trying to give the player, if any?

I don’t know how to evaluate any solutions to this problem, because frankly I never understood the early game, and from what I can tell the players don’t either. I’d love to hear y’all’s thoughts.

Early in the game, the player is never going to encounter much danger outside of toxins, and a low risk of starvation since they are the last universal common ancestor. Resources are going to be plentiful at this stage because they have been unexploited until this moment where life begins.
When it comes to gameplay, this initial scarcity of life and activity serves as a sort of relaxing introduction for new players. It gives them ample opportunity to familiarize themselves with the various resources at their disposal without imminent threats or higher resource needs. We aren’t really trying to challenge the player at this stage, we just want them to become familiar with the basics before resources become scarce and competition begins to rise.

The problem with this is that the player can effectively outrun other species by migrating every generation and thriving off of the large amounts of untapped glucose along the way. This eliminates any need to adapt or progress and results in things feeling rather monotonous for the player. It is for this reason that I don’t like promoting such a playstyle, regardless of how easy it might be, as it largely detracts from the player’s experience in the end.

I think if we want to solve this problem then we either need to entirely rethink the early game, or introduce new environmental hazards to spice up gameplay and encourage adaptation.

More patch-specific hazards and conditions would make for a much more engaging experience I feel, as well as serve to make each patch more unique.

Ok, follow-up question: what, in your opinion, is the purpose of the mesopelagic, bathypelagic, and sea floor? Currently those are just the patches you pass through on the way to the surface, and are that distance is the main reason the player is able to leave the AI in the dust. A tougher early game would involve finding something distinct to do with them, while the shorter early game Maxonovien suggested might involve making a bypass to them, or dropping them altogether.

Ok, follow-up question: what, in your opinion, is the purpose of the mesopelagic, bathypelagic, and sea floor?

First and foremost they provide separate biomes for more species to occupy niches, beyond that they have little distinction at the moment

The mesopelagic is actually a haven for scavengers right now, with the highest rate of occurrence of marine snow, with the bathypelagic receiving some to a lesser extent.

The sea floor however is merely a barren place with nothing notable at all, but that in itself might distinguish it from the others.

Currently those are just the patches you pass through on the way to the surface, and are that distance is the main reason the player is able to leave the AI in the dust.

A tougher early game would involve finding something distinct to do with them, while the shorter early game Maxonovien suggested might involve making a bypass to them, or dropping them altogether.

I think adding a new path from the vents to the bathypelagic might help a bit in that regard, and potentially to the caves as well to make travel to the mesopelagic less linear.
I would also connect the estuary to the epipelagic, or atleast swap it’s place with the tidepool as it makes more sense for tidepools to be isolated.
Finally, I would connect the ice shelf to the mesopelagic in addition to the epipelagic. 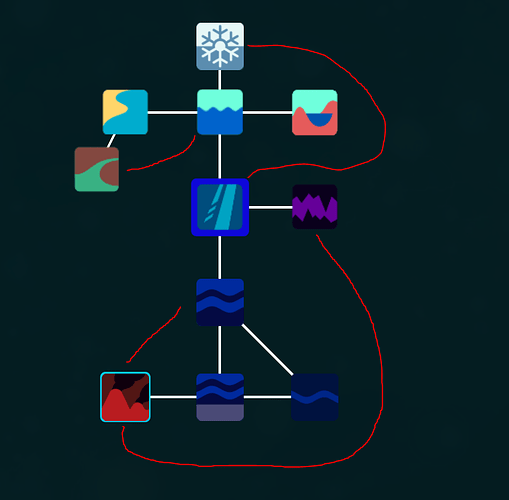 Personally I’m rather hesitant to just drop the patches, and would rather put some effort into differentiating them instead. We’ve discussed terrain generation in the past as a potential solution, but I would also like to see unique environmental hazards similar to the ice shards in the shelfs as well.

I would like to bring up one point I think is being missed here. Which is the fact that a lot of first time players take multiple editor cycles to really get comfortable to move patches. So while you can speed run to the surface if you know the game, many new players won’t be able to. So while it is good to design for the case that the player just shoots to the surface, it also needs to be considered a newer player who might need up to like extra 5 editor cycles to reach there.
Also getting to the surface first is not the endgame. Even if a player gets there first they would still need binding agents and to build up a bigger multicellular creature before they can leave the other cells entirely behind.

To go back on what I was suggesting in the stream, I believe early (pre-surface) game should be, in fact, a way to familiarize with the game, but also offer the player a variety of ways to enter the surface. In fact, at the current time being,

To this end, I think that Buckly’s proposal to diversify pathes is very interesting to fix #1.
For #2, I’d say we could even further this by limiting the free travel between patches,

Finally, the rush to surface can also be diverted through

A final element is that the rush to the surface is also incentized by the simple organisation of the patches: one starts at an end, and so it seems only logical to try and reach the other - here, surface. Since we want players to do that in general, we may keep it as such, but we might want to bring another route, this time to the abysses.

Sounds like we’re in agreement that the value of the early game is easy, simple and quick, and that other species should be bugging you in the first couple generations. As for those first couple generations, I would suggest simply making clouds smaller and more common. Nobody’s expressed that it’s important for the player to “work for” compounds, it’s supposed to be an easy learning experience.

It also sounds like we need to stop the player from outrunning all competition, and that there’s two main camps on how to do that:

The first one is almost no effort and lets us move on to other things faster, while the second results in a more interesting early game (probably, we havent figured out WHAT this gameplay consists of yet) but more development time.

How about requiring certain amount of population that moves with the player? That way you need to actually survive once or twice in a patch before you can move. This could be shown relatively simply to the player by showing a number of population they need in order to move.

I had actually considered that but wasn’t sure about it.

The initial glucose acts as a temporary bridge that allows species to more easily reach new patches that do not yet have an established ecosystem.
Marine snow wouldn’t be a thing without organisms dying in the higher surface patches, but how would they reach those higher patches to do that in the first place if there is nothing to live off of initially?

That being said, I think there could be some ways to work around that, such as ensuring that there is atleast one alternative source of food in each patch to provide the needed support. Maybe then we could experiment with reducing initial glucose amounts in later patches, or even removing them all together.

Something I have always wanted to eventually see, which I think could make the start of the game more interesting. I think these are all planned, but I will mention them anyway, just so we dont forget about it.
1 - Procedural worlds
2 - Tectonic plate movement between generations so that patches change more dynamically over time (this will probably also lead to some species going extinct, at least in certain patches)
3 - Fog of war, so you can only see which patches your species are in and which you can migrate to.

With these additions, you would probably not be able to speedrun towards the surface, but instead try to make a strategy for which patch to move to in order to keep most options open. It would also make for a much less predictable game session.

Also I have also always wanted to see more survival elements and diversity between the patches, so I think that would be a great addition.