Let’s figure our the colours first.

I assume a lot of the colours on the GDD are so because that’s how they currently appear in-game.

So I think from this we can agree that water and ATP aren’t relevant, and agents are variable. This leaves the part of the list to decide.

Glucose - I suggest white, because glucose is sugar and sugar is white.
Amino Acids + Proteins - I suggest pinkish red and darkish red respectively, because muscle/meat is largely protein. Whatever colour we decide, I think it would be better if we made amino acids and proteins two different shades of the same colour, because amino acids are just the constituents of proteins.
Calcium / Calcium Carbonate - I suggest cream or beige. If we add both compounds, I suggest the same as above that both be different shades of the same colour (like light beige and medium beige, with different textures).
Hydrogen Sulfide - Yellow, because it has sulfur.
Oxygen + Carbon Dioxide - Carbon dioxide is listed as red in the GDD, but I think that doesn’t make sense, and I much prefer TheCreator’s idea of having oxygen and carbon dioxide exist in large and dilute clouds swirling through the environment, with oxygen being light blue and carbon dioxide being dark blue.
Ammonia - It says yellow in the GDD, but hydrogen sulfide makes much more sense as yellow, and ammonia is colourless, so we could make it light grey.
Hydrogen - Will this really need to exist in clouds?
Nitrogen - Will this really need to exist in clouds?
Hydrogen Cyanide - Although this is typically colourless, since Ammonia is light grey and Glucose is white we could make this light brown, light purple, or light orange?
Lactic Acid - White and cream and beige are taken, so we could make this light brown or light orange?

I agree with everything except

Hydrogen Cyanide - Although this is typically colourless, since Ammonia is light grey and Glucose is white we could make this light brown, light purple, or light orange?

Hydrogen cyanide could be a bright color to help players identify it as dangerous. If I recall correctly, the shocking pink dragon millipede secretes hydrogen cyanide. It could be a hot pink compound.

Lactic Acid - White and cream and beige are taken, so we could make this light brown or light orange?

I didn’t see green on your list. Lactic acid could be an acid green or a light green.

I feel like choosing colors is too much of a personal opinion, but I feel like ammonia should be yellow. Most people have that connotation, and both ammonia and hydrogen sulfide are colorless, so it’s not like we’re breaking any laws here.

Oh yeah you’re right, H2S is colourless, it’s only sulfur that’s yellow. In that case I’d be fine with either ammonia or hydrogen sulfide being yellow.

Even gaseous compounds should probably exist as clouds, otherwise players will never know they’re collecting or processing them.

But are hydrogen and nitrogen important enough to exist in specific clouds, rather than being general concentrations as a feature of the biome?

Since TheCreator has finished compound clouds, let’s settle the compound colours for the time being and we can revisit it later.

We will worry about Hydrogen, Nitrogen, Lactic Acid and the rest later. Any objections to these colours?

Any objections to these colours?

yes, the problem with these colours is the pallet of them: 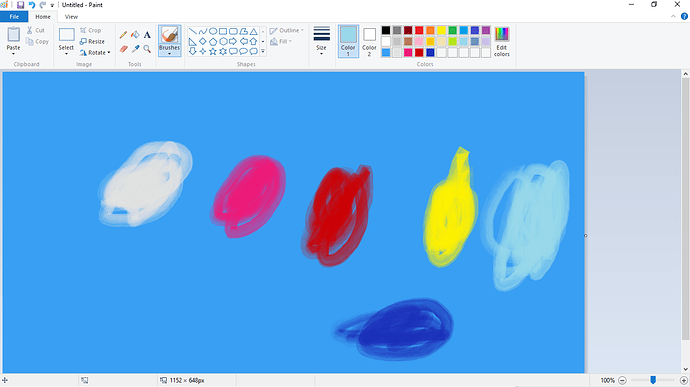 Pasted image1366×768 219 KB
yes i know i did a thing in MS Paint, but you get the basic idea, these colours are going to be the main colours on the screen and they look bad together, well to me anyway, to me i think this: too much blue, (especially with the background being blue) borderline on the red and it needs green (i’d change glucose to green (i mean really I’ve always seen it as green, never as white, just me?)) yes, yes i know these are placeholders just thought i’d let people ponder it
ie. something more like this: 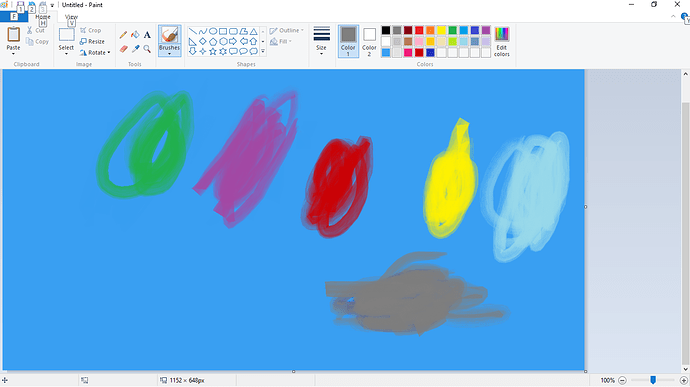 What you have to remember is these colours will have varying intensities and the background will still show through most of the time, so vibrant blobs of clashing colours shouldn’t appear too often.

On that note though, we could base compound colours, at least initially, off this palette of desaturated tones.

I’m going to have to disagree with you on this. You’re basically doing what my art teacher calls, “Describing colors over the telephone”. There are myriad different shades of yellow and even more of blue. I agree that the palette you made doesn’t look good, and I’d say that second one doesn’t look that much better, but you got all of the shades wrong. The yellow is more of a desaturated orange, the background is not as bright, and the light blue is really cyan. Also, as oliveriver mentioned, the clouds all are textured so that you can see the background beneath them, which acts as a unifying element. Finally, you won’t really see amino acids or proteins that often, it’s mostly ammonia, glucose, oxygen, and carbon dioxide in the environment. If your internet gets better, you can download the compounds clouds beta and see the colors for yourself, or I could just post an image here.

I do agree that we need more greens. I vote for having carbon dioxide by greenish (because carbon and greenhouse gasses).

Oh, and I don’t think these colors are placeholders. This is what we’ll have for the rest of the microbe stage.

Part of the reasoning for that palette also is that there are more compounds that need to be added, which will be taking up the other colours (green, grey, purple, etc.)

i agree with you, i did think something like this was the case but i never mentioned it, i guess i should avoid making rash posts when im sleepy in the future, anyway i think as someone else said before this is something that we will never agree on, (eg you think carbon dioxide should be green and i completely disagree) so the colours that are there are fine for now, and as i said before i’ve never really been good at colours so maybe i should just belgum up, though it does raise an interesting question, how do we choose good colours for the compunds? becuase lets face it we are never going to agree on one colour, maybe we should put a pole put in the thrive community to see what colours everyone associates with certain compunds and choose from them or something like that. but then the problem is some compunds people will not have heard of… food for thought.