Trying to make the CPA system prototype without a finalised CPA master list is very difficult. It’s hard to work out if the results are weird because the underlying system has holes in it or because the implementation has problems. Therefore, and because it’s a task we need to do at some point anyway, I think we should make a full and final list of compounds, processes and organelles for the microbe stage. There are previous attempts at this here and here.

Here is a chart of the above. 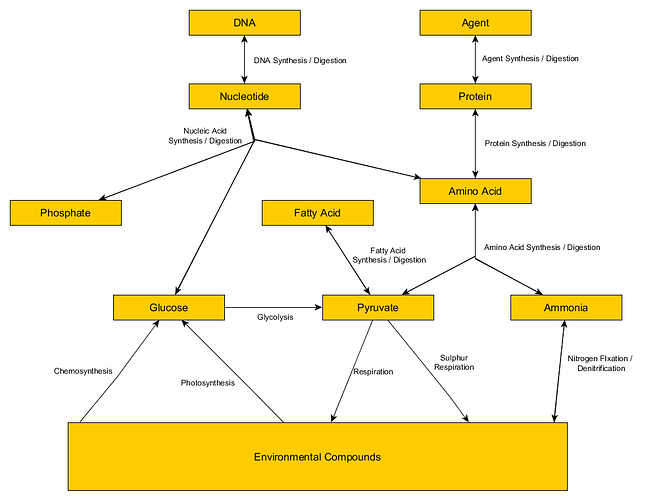 Agents will have different sizes and compositions, and I think we could make their exact metabolic costs slightly randomized, though bigger agents would diffuse slower and be more likely to be specific or potent (maybe as an agent evolves, the formula to create it slowly changes too, getting bigger/smaller as the agent gets better, etc). For now, we could just throw any simple combination of a few amino acids and maybe a sugar or nucleotide or something.

Copied over from the parent thread:

Is there any reason we can’t do this now? I think it will be important to actually balance the equations to avoid accountancy problems with creation or destruction of compounds.

. In these equations I made sure to keep carbon balanced, ignored the production and incorporation of water since the amount of water turned over through chemical reactions is always very small compared to the amount of water a cell requires for all sorts of other reasons (ie, a scenario where water is a limiting factor in a reaction is a scenario where the cell has a whole lot of other problems), and used ATP not so much as a chemical compound, but as a unit of energy accounting, to quantify the number of ATP-equivalent units of energy usably produced, or required, by each reaction.

So, for example, you will note that the fat reactions don’t preserve pyruvate, but that’s ok since carbon is preserved, and excluding photosynthesis, ATP is generally lost in reaction cycles, as it should be, since the Gibbs potentials are what drive these reactions in a certain direction in the first place.

How are you driving reaction rates? I imagine you are doing a simple rate law thing. This is a problem with the current game too, since reaction rates in living cells are controlled heavily by gene expression, ligands, etc, and are thus not simply driven by the quantities of each reactant and product. The question is, how do we quantify those regulating factors?

I think what we need to do, just as much as producing a set of processes that doesn’t have any hidden perpetual energy sources, is come up with a specific rule for the rate of each process. For example, what determines the rate at which a cell produces ATP through respiration? Or glycolysis? Or deamination?

I made sure to keep carbon balanced, ignored the production and incorporation of water

Yeah I think it’s fine to ignore water if you live in the ocean, makes sense you would never run out of it. However things like oxygen and, as you say, carbon need to be conserved.

So, for example, you will note that the fat reactions don’t preserve pyruvate, but that’s ok since carbon is preserved

I’d rather balance everything. I think it’s just easier in the long run rather than trying to take shortcuts. I don’t mind doing all the work to do the balancing.[quote=“Moopli, post:2, topic:167”]
How are you driving reaction rates? I imagine you are doing a simple rate law thing. This is a problem with the current game too, since reaction rates in living cells are controlled heavily by gene expression, ligands, etc, and are thus not simply driven by the quantities of each reactant and product. The question is, how do we quantify those regulating factors?
[/quote]

Interesting. I was thinking of making a “compounds in a bag” prototype for that reason. We do need to be careful about perpetual motion.

We could further tie this into this discussion to finalise other aspects of each compound, such as colours and representative icons, for game builds in the closer future (the CPA system doesn’t need to be implemented wholesale until around 0.5.0, but compound colours and icons will allow compound clouds and the GUI to be updated, for instance).

I made this table in the GDD by collating some of the known compound information and making things up (the icons, for instance, are just guesses right now). Below is a table of organelles, and below that a table of processes. I agree that now is the time to fill those out as much as possible, and confirm all the choices already there.

Fortunately, the charging one has been solved now that we've all standardized on mini-USB. Or is it micro-USB? Shit.

Ok, so for each compound we need to define a few things: chemical composition, colour, symbol, relative weight, additional notes and probably some other stuff. If we can start getting a complete list or table with all of these things decided upon for each compound, that should cover enough for the compound part of the prototype (processes and organelles will still be required though).

7 posts were split to a new topic: Compound Colors

Ok so some more thoughts:

If we don’t include nitrate:
Denitrification: 2 NH3 -> N2 + 10 ATP (some bacteria convert NH3 to NO3/NO2 aerobically, producing some energy, and others use NO2/NO3 as electron acceptors in anaerobic electron transport chains – adding them up we get about 8-10 ATP being recovered)

In the interest of keeping this discussion moving I’ve forked the colours discussion out so both can continue independently.

I have updated the top post significantly. Does anyone have any comments or suggestions? Now would be a great time to speak up if you have opinions on this as I’d like to move towards finalising the list and closing the discussion. I know DNA hasn’t really been on the list before however I think it’s kind of the star of the show. What do the rest of you think about it?

I think with DNA these would work better:

With those changes, it might be worthwhile to simply rename Nucleic Acids to nucleotides, because it just makes more sense. Last time we decided to remove them, it was cuz we couldn’t justify modelling them independently, but now we can: DNA is built from them, and they can also be used in the production of organelles (them becoming locked would simply symbolize the production of ribosomes, etc, and other uses).

Oh, and for NA synthesis and digestion (or nucleotide if we go ahead with the rename), we should throw a phosphate in there.

As for Agents, I think their digestion should be into Amino Acids, with no ATP recovery, and done in lysosomes.

Have made the changes (not to the image though). Will add phosphate if you’re sure it’s worth it.

So I looked up bioluminescence, and it turns out that there’s no actual organelle for it. I’m not sure if you guys would want to fit this into the CPA system, but bioluminescence is the result of the oxidation of a compound known as luciferin.

There are many different kinds of luciferin as it has evolved in different species over the course of time. Firefly luciferin requires ATP to use. The chemical formula for FF Luciferin is C11H8N2O3S2.

It’s a bit on the expensive side but it’s the more realistic option. Just gonna leave it here for you folks to decide what to do with this info.

Yeah interesting. I suppose it could be an agent which glows when you emit it. It’s probably easiest to have it be it’s own organelle. Not sure. Maybe it’s nice if it’s an abstract thing you can add to your microbe which makes the whole thing glow. It’s really a graphics decision I think.

I’m really looking forward to deep dark gameplay. I love the idea of swimming around in the dark and not being able to run your lights all the time. I think that’s cool.

Made a mistake. One of the community forumers (early0000) pointed out to me that certain Eukayotic protists actually have a bioluminescent organelle.

It’s not understood how it works though so… I’m also leaving it up to you to decide.