Buckly brought up exploration in discussion and I haven’t seen a dedicated thread for it. So I wanted to centralize some thoughts regarding it instead of having a lot of scattered ideas across various threads and discord.

It was mentioned that right now, the only reason why a player would want to explore is to find more compound clouds. I think that’s a good base layer for incentivizing exploration as it is mission-centric to the gameplay loop as a whole, but I think we should definitely add a few more accents to exploration.

Because of how insanely petite microscopic organisms are, it’s hard to represent exploration within the Microbe Stage in a way that doesn’t break immersion. As such, I think the scope to which we will encourage exploration should be defined a bit, and I personally think that the Microbe Stage doesn’t need too much to have exploration sufficient to the purpose of the stage itself. I believe the crescendo of such elements will peak in the late-Multicellular and Aware Stages, where players are able to explore a 3D world and will be able to more visibly understand their position in space, so the Microbe Stage probably doesn’t need to be too grand in this regard.

Instead, I think the charm of the Microbe Stage will be transforming the player’s perspective into that small of a space – providing objects, like miniscule grains of minerals or such as a comparison point, and providing just enough incentive to makes sure that players might conceivably roam around for reasons other than finding food, even for just a bit.

We can think of exploration in two regards…

This is where bonuses and incentives step in – where we encourage the player to move around and interact with their world a bit more. But we should be wary of implementing mechanics which necessitate exploration. The best kind of exploration is that brought on by curiosity; if we introduce too many things which the player has to go out and get, exploring the world becomes a chore rather than a fun activity. We have a need right now: compound clouds. We should now focus on introducing the bonuses, and I think a good way to do that simply is by introducing a way to discount cell editor parts.

My mind immediately goes to lateral genetic transfer. I’ve seen one of Buckly’s concepts regarding lateral gene transfer, outlining multiple forms of it seen on Earth and proposing ways to implement said forms. I honestly think that for the purpose of Thrive, transformation, where cells pick up random floating bits of genetic information and integrate it within themselves, is good enough. We can have it so that if a player picks up a certain amount (2? 3?) their next move in the editor, be it an upgrade, part placement, etc. gets heavily discounted. Or maybe free?

I know that in real life, lateral gene transfer represents an important aspect of prokaryote evolution; prokaryotes stay simple enough to rapidly uptake genetic information so that they can rapidly pivot metabolic strategies and tolerances in fluctuating environments. It becomes a bit less potent for eukaryotes, who prefer the extra protection of a nucleic membrane from genetic parasites over the potential to pick up free genetic information. Also, sexual selection kind of wilted out lateral gene transfer (here is source from Nick Lane for the past two points: Genome expansion in early eukaryotes drove the transition from lateral gene transfer to sex — Nick Lane (nick-lane.net)). Perhaps we can have it so that if the player with a nucleus wants a discount, they need to get more free-floating DNA. That weakens the incentive to explore for eukaryotes however, so we’d probably need another bonus as well. And we should also ensure that lateral gene transfer isn’t making progression and evolution too rapid.

Another simple, rather gamey suggestion: similar to the free-floating toxins, perhaps we can have a free-floating healing item? I don’t know what it would be; maybe a lipid of a membrane floating around, although perhaps that would be too much like food. Maybe a mineral of sorts, like Zinc?

Of course, I think the best possible “why” for exploration in a game is just for the sake of exploring the game itself, thinking of Red Dead Redemption 2 or Ghosts of Tsushima in that regard. That ties into things like aesthetic beauty and grandeur however, which will likely show up in the later stages and is limited in this microscopic scale, so that’s a discussion for another day.

What other non-mandatory incentives can we implement?

How Will It Be More Interesting?

In other words, what things which don’t necessarily provide benefit to the player can spice up the world around you? This’ll make exploring in general more interesting, so that the world atleast feels less monotonous. I think this is where a bit of creative flair will come in, making the world feel more like a world with things going on instead of just an abstract patch.

One aspect of this that I think is simple can involve more objects floating around, like microscopic parts of sand, tiny rocks, flecks of crystals, snowflakes, etc. Objects which serve to be nothing more than a visual cue spicing up the scene. Obvious concerns regarding prokaryotic scaling, but I am pretty confident that various of the smallest grains of minerals can atleast be represented on that microscopic of a scale, and definitely so with eukaryotes. There already is some abstraction in the size comparison of eukaryotes and prokaryotes anyways. Let’s model some rocks!

Other aspects involve procedural terrain, which is a whole other discussion itself – more regarding implementation than design I feel: https://forum.revolutionarygamesstudio.com/t/microbe-stage-terrain-generation-and-features/777

The ideas seem pretty coherent, so it just needs to be implemented eventually. The question is obviously when, and I think it’s a better idea to first implement those more basic possibilities first. Procedural terrain generation also brings things up like lava flow.

Maxonovien also brings up that along with visual richness - increasing the selection of potential objects on screen - we should also be thinking about introducing aspects of variety within those objects themselves. So perhaps different forms of fractal snowflakes, or different mineral formations. Obviously that would require more intense effort, but it could go a long way.

What other miniscule objects can we implement?

As a post note in regard to exploring the procedural map: I think it’s fine if we just implement a fog of war, where you can only see a certain amount of patches beyond your current one. This adds a bit more weight to the decision to move – I sure hope there’s a better patch here if I move there, or I wonder if the ocean surface starts after this patch or the next, or I didn’t know there was a cave/abyss here; things like that. We should probably mentally distinguish between exploration in the actual gameplay itself and exploration through the patch map.

As a post note in regard to exploring the procedural map: I think it’s fine if we just implement a fog of war, where you can only see a certain amount of patches beyond your current one. This adds a bit more weight to the decision to move – I sure hope there’s a better patch here if I move there, or I wonder if the ocean surface starts after this patch or the next, or I didn’t know there was a cave/abyss here; things like that. We should probably mentally distinguish between exploration in the actual gameplay itself and exploration through the patch map.

Regarding this
i was thinking of making only the explored patches and the ones immediately near the player visible OR
The same thing but with regions.

I think it would be a pretty good idea to hide the patches that aren’t next to ones the player is currently in / has been in from the map to require the player to explore it to find all the patches.

Hiding unexplored patches/regions has already been planned from past concepts so it should be added. In this concept art for example, how it’s done visually is fading out the connecting lines to the hidden patches. 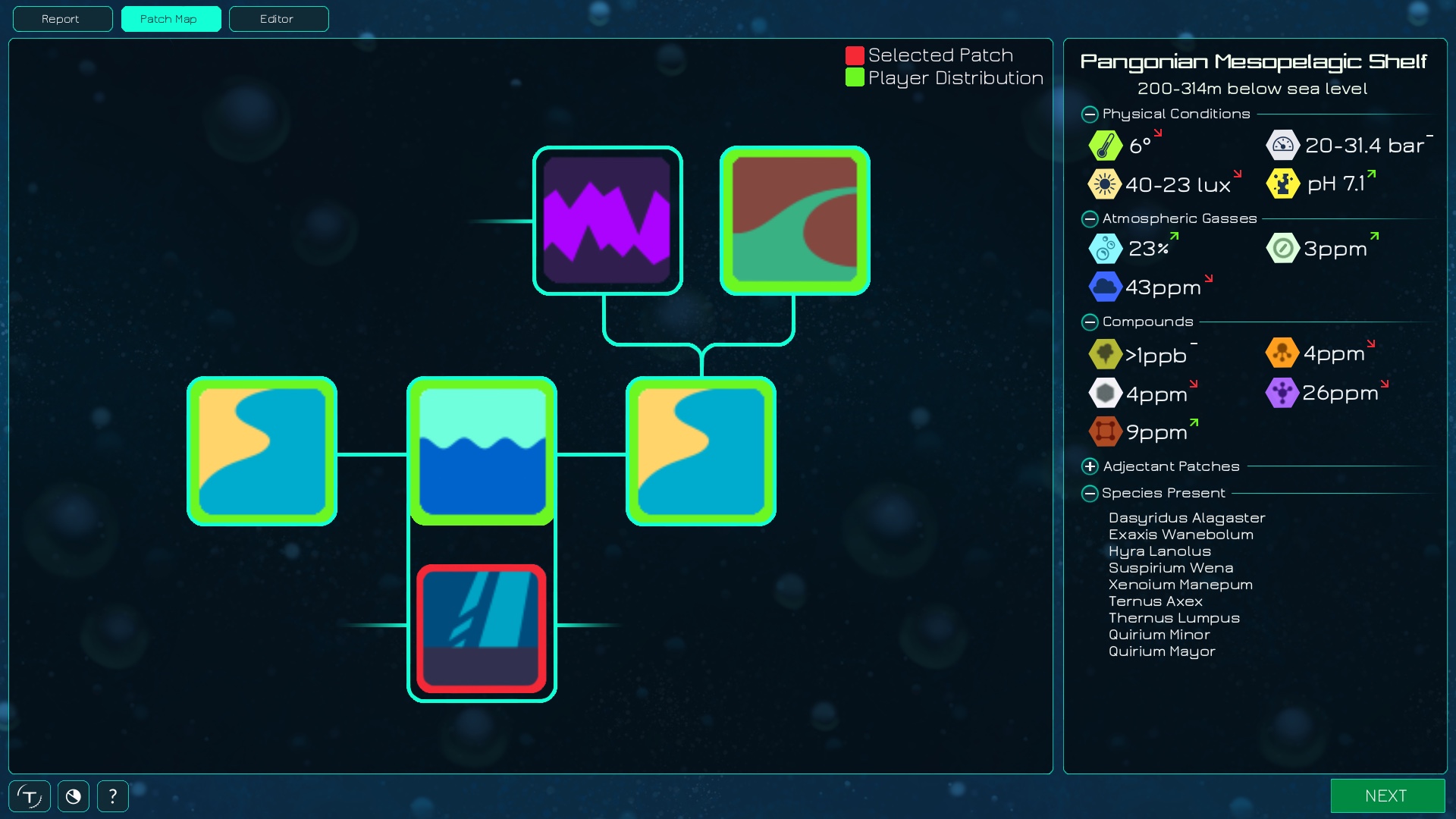 Speaking about environment “embellishment”, I’m no expert but I think that it would make sense that you could have minerals and low-solubility salts forming very small crystals. Modelling wise the particles shouldn’t even be very complicated to generate as they usually follow a very regular and geometrical structure (but I’ve just dipped my feet in 3d modelling so don’t take me for granted). Apart from that I would imagine you could have different bubbles of gas produced by various sources (that could maybe scatter the light in different ways and shift its color?). Not much more comes to mind, but maybe we could also think about having zones in which light has to pass through weird structures and generates some cool environmental effects? These could be some “points of interest” without a real in-game scope that are pretty to see and hard to find?
Hope these are not stupid suggestions!