Pursuant to Game Design Decisions in Bucky's Absence - #13 by hhyyrylainen, this is an experiment in setting up a voting thread on a specific gameplay concept that would be immediately actionable upon reaching a decision. I will open a poll for voting on Wednesday, leaving people plenty of time for freeform discussion even with the holiday. If anything is selected other than the “take no action” option, I’ll go ahead and make a PR to enact the change.

Flagella are the organelle that provides speed and uses lots of ATP. The movement property of a flagella costs 7 ATP, whereas the next highest cost I can find is the oxitoxisome at 5. In exchange, the flagella speeds up the fastest microbe (1 hex, most flexible membrane) from 77 to 100 speed, and speeds up an example really big microbe I made from 18.6 to 29.2 speed. The fastest I could get this big cell was 60.3, at 10 flagella which seems to be the max bonus (I haven’t checked the code in detail) 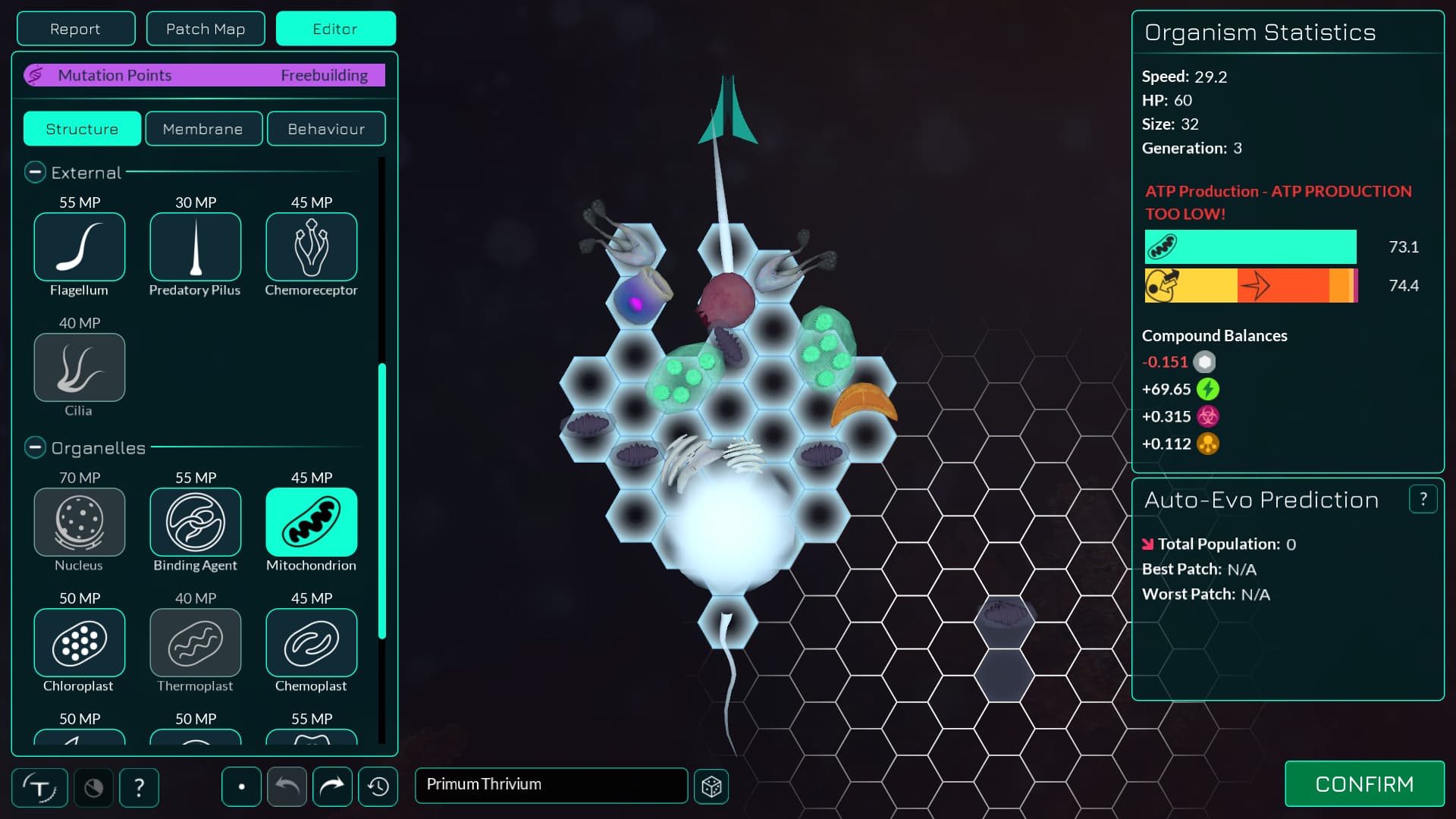 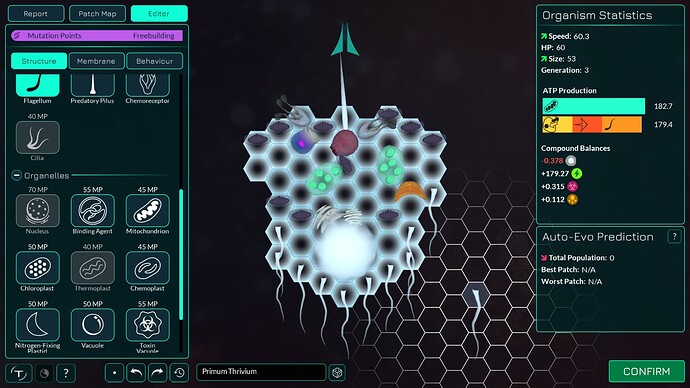 To be fast enough to catch this example prey cell (a pretty common design for auto-evo to come up with), I still needed six flagella, and would then need to drop some other organelle. 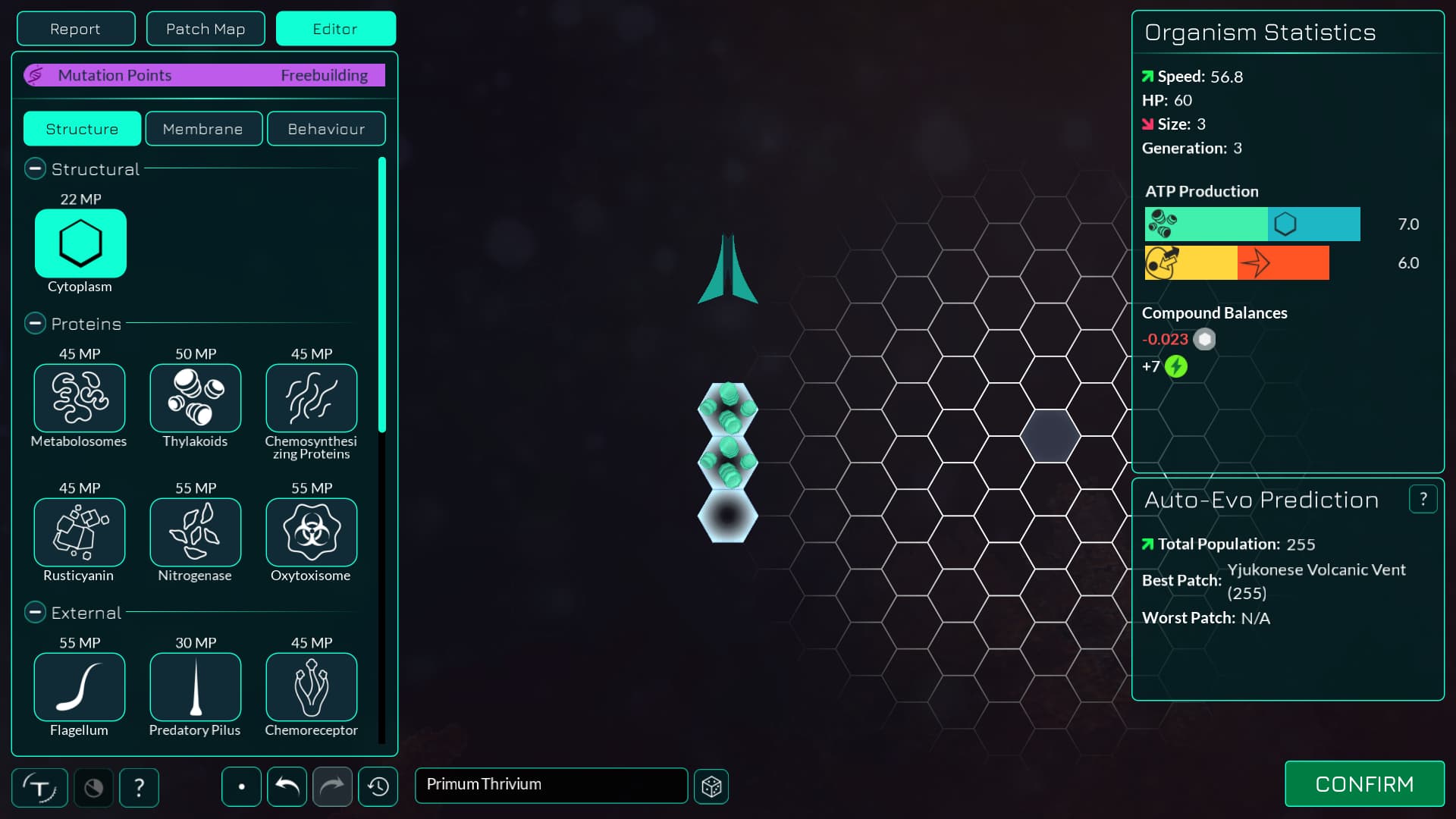 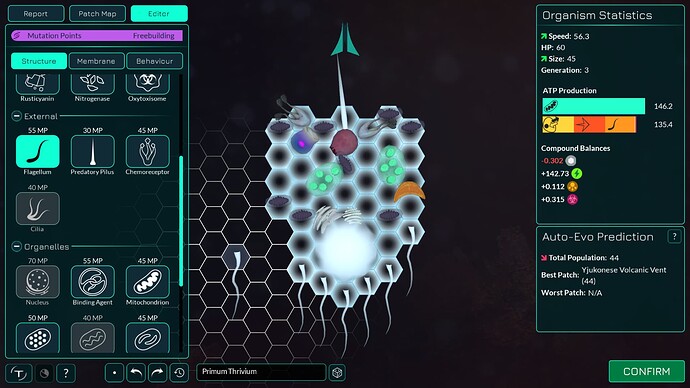 Players have complained that this isn’t enough bang for your buck, although a lot of these comments are also talking about colonies, which might be beyond the purview of what we are balancing for. I have not made an attempt to hone in on whether the issue is that the player feels like each flagella is underpowered, or if it feels like it takes too long to add enough flagella to get to a speedy build.

I also feel that there’s a more subtle issue, which is that the ATP cost might be prohibitive for the auto-evo to ever develop species that make use of flagella. Essentially the issue is that you need 9 surplus ATP for a flagella to not make you ATP negative as a random mutation, and that’s not likely to happen until the cell is very big or the species just happens to have been holding on to a metabolosome by chance as a useless mutation.

There is one important caveat to this, which that the auto-evo should already have a scotch tape solution to this, which is essentially to just incentivize excess ATP in predatory species in hopes of making an intermediate form. This doesn’t seem to have panned out, but Buckly and Maxonovian’s branch for fixing auto-evo may make it start working (I will skip details of the bugfix as I don’t think it’s important here). Obviously not ideal anyway, but it’s possible that we can keep the high ATP cost and still start seeing AI species with flagella.

I propose three options to start with, but if people want to add anything concrete I will add them to the vote. Exact numbers would be up for adjustment when actually testing the PR of course, but I wanted to be specific so we’re all talking about the same thing.

that there’s a more subtle issue, which is that the ATP cost might be prohibitive for the auto-evo to ever develop species that make use of flagella. Essentially the issue is that you need 9 surplus ATP for a flagella to not make you ATP negative as a random mutation, and that’s not likely to happen until the cell

Although I agree that flagella probably need revisiting, I think the problem here is ill-posed. Your example species are of respective size 3, and 32-53, which means an average body volume ratio of roughly 11-18. That is a lot. Being large comes at a high cost, since you have to find more food. This is why most species are small, and even microbial. Large species of course exist, and so it is key to understand why they came to be.

There’s much more to say here, but I believe we should focus on this question : how much do we want these big cells to be good predators for these tiny cells? I for one am fine that this big species does not predate much on the tinier. I feel we should rather focus on species of size 5-10 for this purpose, and try to get bigger cells evolving for richer predation.

For the matter at hand though, I’d also like to point out that flagella normally lose efficiency the further away from the central axis (which we might want to reconsider), so your build is not optimal. And I agree this would make auto-evo more in favor of this (although, perhaps not before we’ve fixed the final balance bug).

As a final note, an article (under a paywall, alas), that could be of interest : Effects of Predator-prey Body Size Ratios on the Stability of Food Chains - PubMed

Pendulum seems to have swung towards 3 here which in my rookie opinion also looks the best. I’ve also been seeing that users have been having complaints with speed, as you said probably coinciding with colonies and multicellularity especially.

Predation definitely is something of a hot topic in the community, with many saying it takes a lot to go right in order to have an adequate predation-build. I think a part of this is the fact that the nucleus still is pretty penalized by auto-evo hence reducing most viable prey to tiny and relatively sparse prokaryotes. Predation could probably use its own topic here.

Perhaps Buckly’s suggestion of implementing some sort of “sprint” function should be considered for the near future releases, going faster temporarily at the cost of burning more ATP/glucose? We can tie this sprint function to the possession of flagellum too, so that players won’t have to place as many parts down to attain a sprint speed usable against non-flagellate bacterium. It can be pretty simple at first but can branch into flagella modification/customization when we are ready for that (one end being sprint speed modifier is quicker but so is energy consumption rate on one end for bursts, other end being slower sprint speed modifier but slower energy consumption rate for more sustained cruising).

I did make a PR for sprint a while back, but it ended up being abandoned. It did make predation a little easier.

**Brief Description of What This PR Does** Adds a simple sprint option so t…hat extra ATP production and storage can still help. Sprint doubles speed, and can be combined with engulf mode (I've also made the penalty for engulfing more generous, so that timing engulfs to the last second isn't such a big part of hunting), but doubles movement cost. In addition, this adds a stress value that slowly increases while sprinting, upping the ATP cost so that no microbe can sprint forever. Once merged new issues need to be opened for: - Explaining sprint in the options menu - Adding a sprint tutorial - Adding a toolbar button for sprint that can indicate the current tiredness level **Progress Checklist** Note: before starting this checklist the issue should be marked as non-draft. - [x] PR author has checked that this PR works as intended and doesn't break existing features: https://wiki.revolutionarygamesstudio.com/wiki/Testing_Checklist (this is important as to not waste the time of Thrive team members reviewing this PR) - [ ] Initial code review passed - [ ] Functionality is confirmed working by another person (see above checklist link) - [ ] Final code review is passed and code conforms to the [styleguide](https://github.com/Revolutionary-Games/Thrive/blob/master/doc/style_guide.md). Before merging all CI jobs should finish on this PR without errors, if there are automatically detected style issues they should be fixed by the PR author.

I think that dropping the energy cost from 7 to 4 would be a potential solution, but it would take too many generations to actually get enough flagella per cell. the MP for each flagella is 55, and to get the maximum bonus speed, Thim had to add 10 flagella. In gameplay, this would be incredibly irritating. I propose a fourth solution, make the flagella upgradable(maybe make it so you need a nucleus to do this). This would let the larger cell stay competitive with fewer flagella, and not require an excessive number of generations to work.

What would you suggest the upgrade do? Unlike the other suggestions, this wouldn’t be one I could readily implement.

the upgraded part would be faster, at the cost of more energy. It would be consolidating multiple flagella into one.

Ok, so it sounds like this is a secondary change dependent on balancing a single flagella first. I know that there’s been plenty of talk about organelle upgrades already.

The organelle upgrade system is already mostly written, just need a little bit of more work on the base system and then it’ll be usable for all kinds of upgrades.

Alright, the poll is up. Get those votes in.

Maybe for the future it would be nice to set an automatic close date, maybe 5-ish days? So that everyone can see when the poll will close.

None of the options feel like a perfect solution to me, but I’m willing to try them.

I think that gets into a slippery slope since flagella are generally less useful as the mass of an organism goes up, which is why they generally disappear after a certain size and then larger morphology takes over (think of using only your fingers to swim). But it can easily be made so that this size-scaling only goes up to a certain size.

Atleast flagella are easy to tinker with (I think?), so we can easily alter them and try another thing soon after if the first option doesn’t work.

In the future we can set a fixed time to live for the poll, but with these results I think we can call it now. As such I’ve made a PR for the change: Reduce Flagella Energy Cost to 4 by adQuid · Pull Request #3261 · Revolutionary-Games/Thrive · GitHub