First of all, here’s @Minegamer117’s current interpretation of the abyss biome, which is what mainly provoked the conversation about this topic. 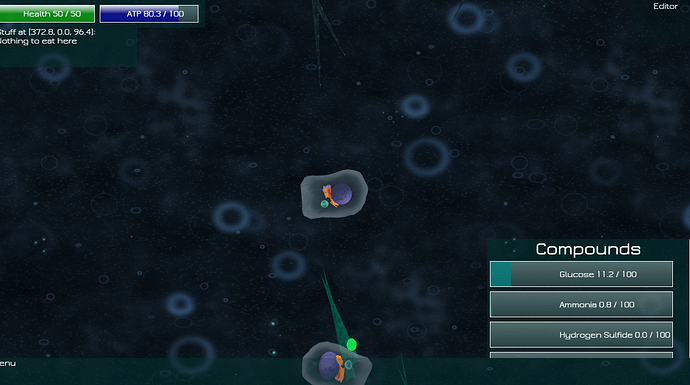 abomination1252×699 639 KB
This background has bioluminescent cells in the background, which does look quite cool, but imo it would be strange to see them if bioluminescence hasn’t even evolved on your planet yet, or at least moved into that specific abyss.
Also, if the color of “chlorophyll” on your planet is pink, I think it’d be disappointing to still see a green cloud of photosynthesizers in the algal bloom biome. (and, if chloroplasts or photosynthesis don’t exist yet, algal blooms shouldn’t exist either) Rather than having completely different backgrounds for every possible biome variant, I suggested that the game instead turns on and off, and shifts the color of, specific background layers whenever necessary: The difference between a dark abyss and a glowing abyss wouldn’t be an entire background, but simply a single background layer.

Also, @Untrustedlife believes that all biomes should be built after physical features rather than biological ones: hydrothermal vent, tidepool, deep ocean, shallow ocean, mountain, rocky plain, etc., and the rest of the biome is defined by organic features generated by the game. For instance, the current algal bloom biome would simply be a shallow ocean with a high population of photosynthesizers; when in that biome, the game could use the background used for the normal Shallow Ocean, then turn on a background layer containing algae clouds, and then change the color of those clouds to match the chlorophyll color of the photosynthesizing cells in that biome. (and perhaps tint the other layers a little too)

This would also allow for more possible different biomes in the Microbe stage, and therefore more uniqueness and less similarity to Earth.

For instance, if you were to somehow have a bloom of blue algae, plus bioluminescent cells, next to a hydrothermal vent, the game would totally be able to do something like that! (if, of course, the game’s systems allows such a biome to exist in the first place).

When choosing which theme music to play, or when in any other situation in which the biome needs a specific, preset label, (swamp vs. rainforest vs. forest, for instance) the game could simply take a look at the biome’s stats, such as its humidity, what sorts of organisms live there, temperature, etc., and decide what sort of biome it most closely matches.

Perhaps dense clouds could not only be used for algae, but for high populations of certain cells in general? How would the game know what color to make them?
What other biome factors are there?

yeah, I know it’s some work to write a system for that but I think the game could benefit