If microbial biomes are on the cards in the near future, we should start creating a list of them with their associated visual characteristics and changes in game mechanics. Some concept art would be helpful here too.

Here’s what we have so far:

Question: How are heat spots intended to be represented? I was thinking of making bubbles like the water were boiling or something.

Question: How are heat spots intended to be represented? I was thinking of making bubbles like the water were boiling or something.

That’s a nice idea. In general a good representation of something is when someone can look at it and say “oh that’s obviously a …”. I know that’s kind of a simple point but in terms of heat spots it’s not easy. Some sort of boiling batter could work well. Basically anything that makes it clear what it is. 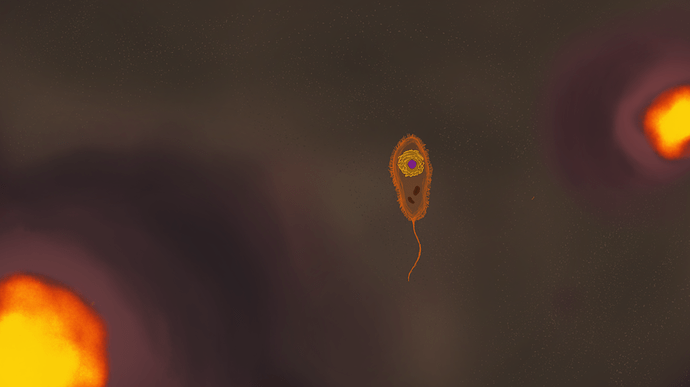 Ah okay so bubbles would work then. Will update image a bit later. Maybe we could add some kind of environmental hazards. Perhaps swimming directly into a vent will kill microbes, so sessile bacteria and other thermosynthetic organisms would be crowded around it.

The problem with that is the scales we’re dealing with - a hydrothermal vent is going to be massive compared to a microbe, unless it’s something like a microscopic vent. But I do like the idea of having risks associated with trying to assimilate sessile bacteria.

Since there’s another thread dedicated to deciding which biomes will be present and their effects, we can use this one purely for concept art.

I guess one thing we could say is that it’s a perspective thing. Like you could have a microbe and an elephant in the same photo so long as the microbe was close to the lens and the elephant far from it (not sure how the focus would work).

In a way if we can get beyond what we intuitively think and really try and draw things how they would realistically look at that scale we could make something pretty beautiful. Apparently this is mud.

I like that. It’s just, if we decide to make things to scale, how will we ever transition into a new biome?

Transitioning to another patch is a species level thing. You can’t swim from one patch to another. There’s going to need to be another screen where you manage your species. However that’s probably another thread.

So today was the first time in a long time I felt I could do some programming, which was nice! I basically reinvented the wheel so nothing special.

I was looking at some of those rock under a microscope images and wondered if we could procedurally generate cool backgrounds. Like maybe the microscopic world is a fascinating and cool place full of beauty and maybe we have been overlooking how awesome it can be. Like if we get it right we can really bring the player to a place of immersion in this counter intuitive and beautiful world. What doe the rest of you think?

I stated thinking about crystallisation and wrote a program to try and draw things like the rock’s crystalline structure. Anyway it basically just makes a Voronoi diagram so nothing special. But if it could be done in 3D then it might look really cool. See what you think.

Probably the way to make it more realistic would be not to have the molecules align with their closest nucleus but to have them grow more organically. Like as it cools the crystal will form in the places where it gets below a certain temperature. So this temperature process could be modelled and used to make different shapes based on the way it cooled. Fast cooling could lead to a lot of shattered pieces, slow cooling could lead to a very smooth crystal.

The reason solids form is that the presence of a load of ordered atoms near you creates a potential well for you in the next place in the crystal. It’s like if you’re laying a brick driveway, the presence of all the other bricks makes a natural place for the next brick to be added. This kind of crystalline structure comes about when you start laying your driveway in multple places at once with different orientations of the bricks. You end up with these disorientated pieces that don’t fit together.

Interestingly (going off on a bit of a tangent now) the reason Carbon makes iron stiffer (and makes it into steel) is because the large carbon atoms stop the iron atoms from lining up so neatly which means that force isn’t propagated neatly through the neat structure but diffused throughout the material.

Anyway none of that is really relevant. What is relevant is maybe we should be taking this chance to let people see into this cool microscopic world.

Ay I’m all for it! +1 support right here