Ok, so I haven’t had much to contribute since I finished the organelle models, and now that I’m through with finals, I’ve decided to begin work on a new, high resolution, 90 second-ish intro for Thrive. After explaining my idea with a few of you on slack, I have a pretty good idea for how the intro will play out. @hawkstorm said my concept was similar to Civilization IV’s intro, which is here.

The Idea is to have the camera pan across a luminous space scene, and follow a space ship as it travels towards a small planet. Once the planet is in view, the space ship will continue heading towards either a large space port or a violent space battle. Whether the intro is peaceful or violent will depend on the music that will play during it. The camera will then fly through the battle, or past the space port, and into the clouds of the planet.

There it will travel back in time, first through a city, perhaps a modern looking warzone, then into the forest where it will fly through a small tribal settlement, then off a cliff into a jungle, where all manner of predators, prey, vegetation, and anything imaginable could be fighting to survive.

After a quick fly through the jungle, the camera will plunge into the ocean, through a sort of coral reef or kelp forest, or something similar, evolution gives quite a bit of creative freedom.

After a quick look at aquatic life the camera will dive into the abyss, and after a second or two of black, a faint red glow will appear. This glow will become clearer, and eventually reveal either an underwater volcano or a hydrothermic vent. Here you will see cells begin to swim around, some soaking up the chemicals from the vent, others engulfing the smaller ones or spewing poison.

The camera will fly into a cell, most likely one that looks exactly like the default cell, it will pass a mitochondria and fly along a microtube, where it will barely miss a kinesin protein making its long journey across the cell. The camera will then fly into the nucleus and reveal the Thrive logo floating amongst the strands of DNA.

So far I have started with the space scene, here is an example of my first attempt at a starry background with 2 planets. 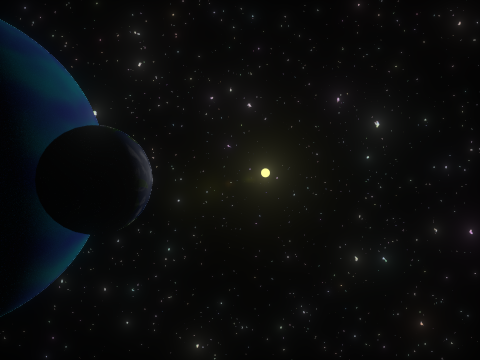 I’ll continue to post my progress on this thread. Feel free to make suggestions or share your ideas.

Ok, I feel confident about the background, with a few galaxies and a nebula (courtesy of NASA’s Hubble Space Telescope) and a yellow star, the starry background is complete, and turned out much better than I expected. I also added a comet, but its not quite what I had in mind, I’ll keep tweaking it, but for now all of the celestial bodies are done, I can move on to the space ship, and perhaps the battle it will be charging into. Here’s what I have done so far, let me know what you guys think. 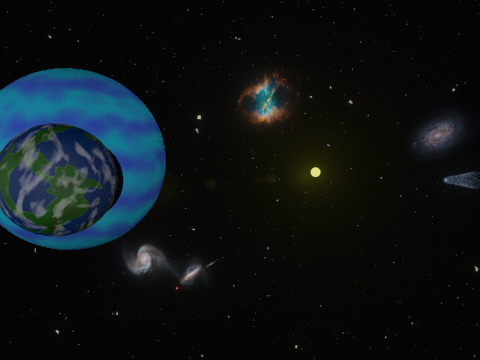 Ok, good news, I’m officially done with finals (well i have one tomorrow but its anthropology, so easy stuff). Which means I now have much more time for Thrive. Here’s what I’ve managed to do this week 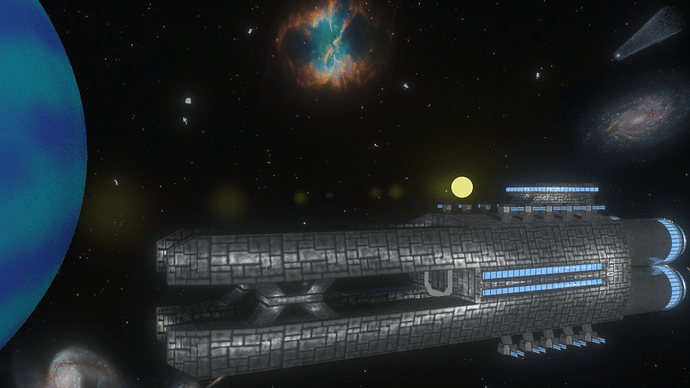 This is the ship that will fly by the camera at the start. I’m going to start working on details, like antennae, lights, maybe even more weapons and smaller ships docked in between the front sections of the ship.

I decided that the first ship I made wasn’t worthy of the first few seconds of the intro, it was too blocky, grey, and frankly boring. So I made a new one. 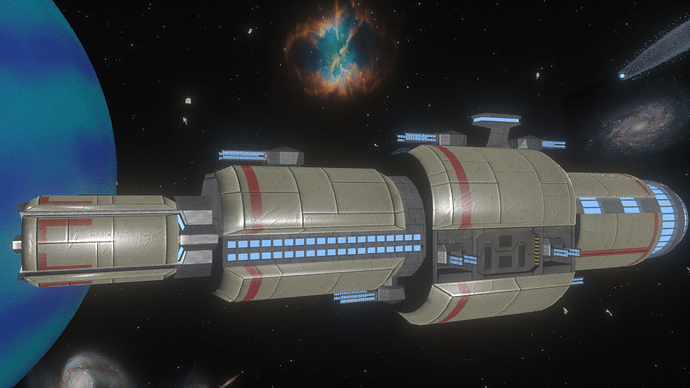 Now that I have 2 ships, I can use this one for the close up fly by and use the other for the distant space battle. Hopefully this scene will take up the first 30 or so seconds of the intro, I want it to last about 2 minutes total, showing each stage for 10 to 25 seconds.

I’ll make a shorter version of the intro using the last scene however, just a quick fly by a Mitochondria, maybe past a Kinesin Protein, and into the nucleus where the Thrive logo will be floating amongst the strands of DNA.

This is looking great! Awesome work!

I would hesitate to make it as long as 2 minutes though - if you’re going for that sort of length it might work better for the credits.

Well as long as you can skip it it should be fine, most game intros are around that length.

@Nanu How are you getting on with this? Would it be possible to show us what you’ve got so far? I’m excited to see what the end result will be.

It’s been almost a year now since I promised to make a 30 to 180 second intro for Thrive, and after 11 months and a fried computer; and a roller coaster of emotions, I still have nothing to show for it. Until now. I’ve decided that I’ve waited long enough, I lost a good minute and a half of high definition renders and complex meshes with detailed materials that took countless hours to craft. But giving up is not an option, with very little going on right now in the realm of 3d development, I haven’t been doing anything for Thrive. It’s time I start putting in effort again. Below is a quick screenshot of a few hours or so of work on the Thrive Logo in the midst of a few strands of DNA. Obviously the meshes and materials need tweaking and detailing, but this is merely a test to see how true chrome reacts to multiple emissions of varying colors. 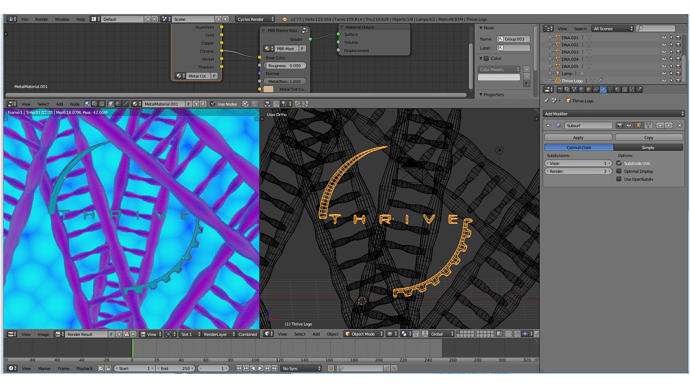 Keep in mind this is a first attempt and the only material and mesh I’ve actually put effort into has been the Thrive Logo, the rest will likely be replaced. I do intend to continue working on this particular scene, and hope to have it in a perfect state by Thanksgiving. Thank you all for being so patient with me, I took a bigger emotional blow than I’d like to admit from losing all of my work in the span of a few seconds. (And don’t worry, I learned my lesson and I’m backing up my files this time)

One final note, Yes, the logo looks blue, that’s because it’s chrome and is reflecting the background and DNA strands. I’m tinkering with different metals but it’s hard to find an environment that won’t change the color/glossiness of a metal object, even a rougher one. I think I’ll be forced to abandon true metal materials and opt for a diffuse texture that looks kind of like metal instead, as that ironically would look more realistic.

As always let me know what you guys think, and any help with this endeavor by other devs who have experience with cycles render will be greatly appreciated

If you wish to make the thrive logo more metallic you might want to give it an anisotropic shader.

Another thing I think might work very well is putting an orange spot light directly behind the logo. This will give it a soft orange glow/halo that will further contrast it against the blue background.

Finally, if you need help rendering anything, I’m the guy to ask. My new rig has 32 gigs of ram, a GTX 1070, and an Intel i7, so it should be able to handle cycles fairly fast. Plus, everything is liquid cooled. Iremember having to render a 40 second animation on my laptop and that took me over a month, so I know how much it sucks.

Alright guys, I took a few weeks off after finals because my brain felt like someone ran it through a blender for a week, but with the new year I’m back and ready to contribute again. I’ve also rendered some of the progress I’ve made on the video.
Here’s a peek at the final scene, still tweaking some of the materials and lighting, and I’ll need to spice it up somehow to make it less, well boring. Anyways here it is, all feedback is appreciated. 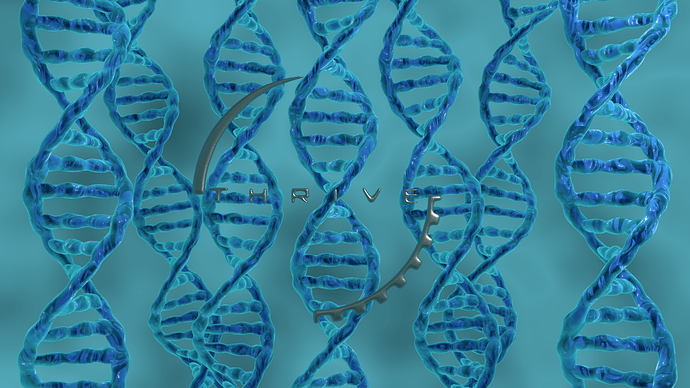 The DNA strands look very professional and much better than the one’s we have currently. My only issue is that you can barely see the THRIVE text, which is supposed to be the focus. I’d suggest adding some dof, but that would get rid of a lot of detail in the DNA helix, which I think would be a bad idea. Maybe you could move the focus around? Start with the DNA being sharp and the logo blurry, and then at the very end focus on the logo. Alternatively a brighter material (maybe add SSS and a backlight?) might make the logo stand out more. I don’t know.

Good job so far! Can’t wait to see how it will turn out.

Yeah that was bothering me too. I kept the dimensions of the original logo but I think I might tweak the size of the text just slightly to make it clearer. Also the final frame will be much close to the logo, it will probably take up the whole screen instead of just 60ish percent of the center

Why not make the logo glow white?

Looking really good so far! I love the DNA too.
I think the logo is too gray - if it were glowing white, it’d be much more visible. 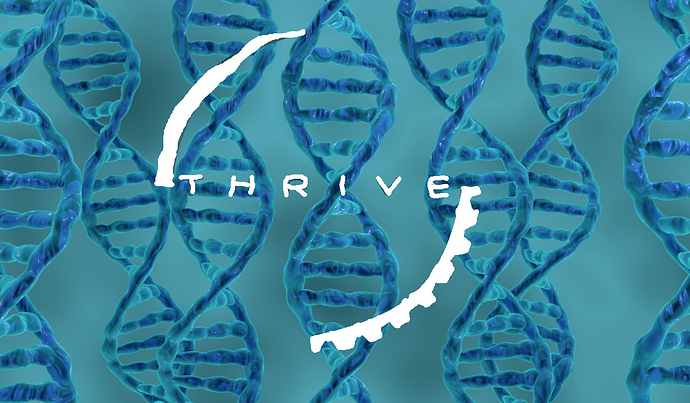 Also, could you rotate some of the strands a bit, and add some at the edges of the screen and in the background? I get the feeling that the 7 we see are the only ones present.

I guess I could, I thought it was supposed to be metal tho.

anyways heres a new render i made a second ago, I gave the scene a yellow light and gave the DNA some light blue emission, I think it makes the metal stand out more. 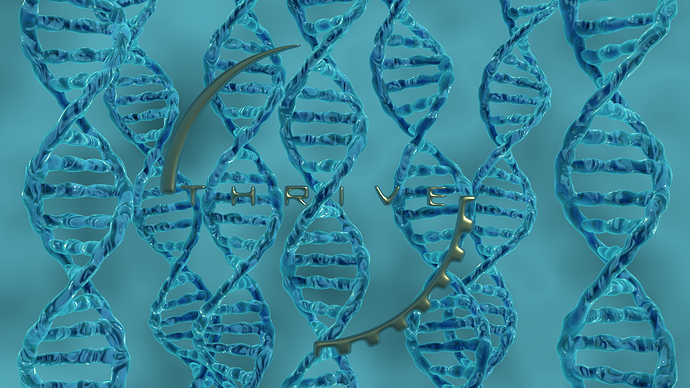 I’ll see about making it white, but would it just be a solid white? like plastic?

Maybe with no reflections or shading if that can be done somehow…? Idk

Theyre each about 400k verts, theyre a lot longer than what you see here because I’m following the original intro where the camera flies through them vertically

I’ll see what I can do

Ok take 2, first time the image wouldnt play well with our forums. This one is the exact same but with a white light and the thrive logo has a pbr plastic material now 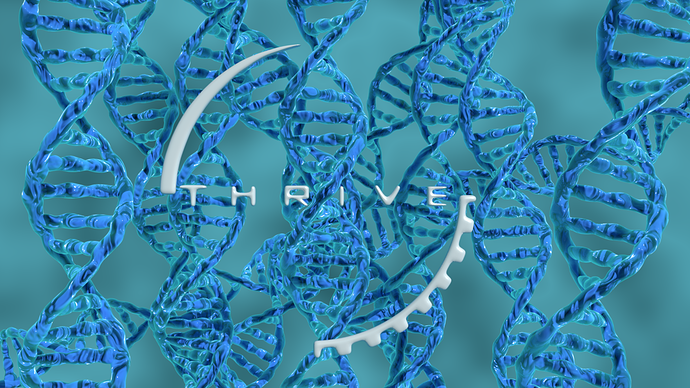