One of the most prominent yet underdeveloped concepts we have for the game right now is how your species will develop intelligence and eventually enter the Awakening Stage. We know we don’t want some sort of simple upgrade system where you simply click “Level Up” on your brain and it advances to the next level, and after a certain amount you become intelligent. On the flip side, our actual understanding of intelligence in ourselves and other animals and how it develops is very primitive. On this thread we’ll have to try and strike a balance between something quantifiable and simple enough to be used by the player, but also taking into account the complexities of animal behaviour we see in the real world.

For reference, here is the original thread on the old forum: http://thrivegame.canadaboard.net/t1540-achieving-sapience

The first step to implementing any of this is to find something by which we can measure the intelligence of any given organism. For some, your first instinct might be “Oh, brain size!”, but that is not an accurate measure of intelligence. A sperm whale has a brain mass of around 8kg, and yet is not more intelligent than a human with a 1.5kg brain, and is about as intelligent as a crow with a 13g brain! I tested this on a sample of 34 different species (using mass measurements of mature, average members of their species), and from the top five species on this list you can see that this method doesn’t work. Humans aren’t even on the list.

With this system, intelligence would develop mostly in large organisms that can support massive brains.

Now what some other people probably thought was a ratio between the mass of the brain and the mass of the body. This is along the right line of thinking, however still does pose a problem. Look at the new top five.

*I multiplied these values by 10^5 to make them easier to read.

With this system intelligence is suddenly only favoured in small organisms that can support a large brain relative to their small body. Also, humans are again not even in the top five.

Clearly, it is not just a direct proportion between brain to body mass. The Enchephalization Quotient (EQ) is an attempt to address this issue by adding some term or operation to the ratio to make it produce a more accurate result. There are two main ways I have seen EQ be calculated. For the sake of this thread, we will call them EQ1 and EQ2. However, first let’s define our variables:

With EQ1, scientists recognized the importance of the brain’s actual mass, as well as the brain to body ratio, towards determining intelligence, so they simply multiplied the two. The following is the top five that EQ1 would yield.

Finally a list where we are number one. You can also see a pretty drastic drop from us to the next closest species. The list this produces is generally quite accurate.

With EQ2, scientists decided to take the allometry of the species into account. Since an organ such as a lung, can’t simply be scaled up to double the size and have the exact same efficiency and properties, so too must the mass of the brain scale differently from the mass of the body to perform at the same level. The exponent for this ratio is approximated at 0.66 (Partly to do with Kleiber’s Law). This is the top five that EQ2 gives us.

Again, a much more reasonable list than the first two. This time creating less of a gap between human intelligence and our competition.

How will this quantification of intelligence affect gameplay? First and foremost, this will be the perfect progression for the Aware Stage. Not only will you have to evolve to adapt to the changing environment, you will also have to fit in a bit of brain growth each time. On top of this, brain growth is expensive. The brain is an organ that requires a lot of energy to maintain. It will take many generations of evolution to get your organism designed such that you have both a big brain and a high EQ. If focus too much on evolving your brain and not enough on adapting to your surroundings and your survival, your species won’t thrive or could even go extinct, so it’s an important balance.

To maintain such a large brain, you would also need a very nutritious diet, which almost necessitates omnivory. A diet of high energy foods would make it much easier to support a large brain and a high EQ.

Of course the development of intelligence will also require effective manipulators, and a social structure to pass down knowledge each generation, but those will be discussed in later parts.

Before we can move on with the discussion, we will have to decide which EQ method to use. Or, suggest another if you feel these are inadequate, but be prepared to come with data and results. For example I think another approach is to take the mass of the brain and subtract the mass of the spine, since the spine scales similarly to m^0.66. Another thing to note, the EQ methods listed are not considered to be very accurate for invertebrate intelligence, which we want to include as well. So to conclude part I:

Which EQ method should we use?

Obviously, these top five lists don’t provide the full picture of what results each equation gives, so for a full list of all the 34 species and their data check out the download link to the excel spreadsheet I made this on below.

This sense will be the most important to the player, simply because we mostly play games based off of what we see on the monitor. In Thrive, the player can play either in first person, where they sense everything as their organism senses it, or in third person, where they sense everything like a human, while still controlling their organism. I can imagine there would be a lot of problems with a third person mode to the organism mode, but for now we won’t throw away the idea. We will stick to talking about first person for now.

The organ that will allow any form of sight for an organism is an eye. In Thrive’s context, an eye is a collection of photoreceptive cells that translate electromagnetic waves into visual images, i.e. they see light. Any organism can evolve this primitive, first step towards vision. In the past there have been suggestions that there be many different eye organs, each with a different role and specialization and focus, but I think it will be both simpler and more elegant if we kept it all as one organ, an eye, and then allowed that organ to have its properties and limitations altered through evolution. The properties I can think of right off the bat for an eye on an organism would be:

Physical Properties
Size: Pretty self explanatory. Eyes will start as just a small patch on the skin, but can be shaped in the Organism Editor each generation. I’m not too sure how the shape of the eye should affect its cognitive properties, however.
Shape: Same as above.
Texture/Colour: Similar deal. Again, I don’t know whether we plan to have the colour or texture of the eye affect its cognitive properties.
Energy Cost: It will cost a certain amount of nutrients to sustain, mostly dependent on its size.

Cognitive Properties
Clarity: Some sort of range over which the eye gives effectively clear vision, or if we want to keep it simpler, an overall clarity in the resolution of what you see.
“Zoom”: Sort of like a hawk-eye adaptation, the ability to focus your vision on something far away, simulated in-game by zooming in your vision. We could also use zoom to focus on things really small.
Light range: A certain range of wavelengths you can see. Humans of course can’t see ultraviolet, x-rays, gamma rays, or many other light wavelengths, and so too will your organism be limited in what it can see. The light range of your eyes could drastically change the appearance of the game.
Water Adaptability: How much or little being underwater impedes vision 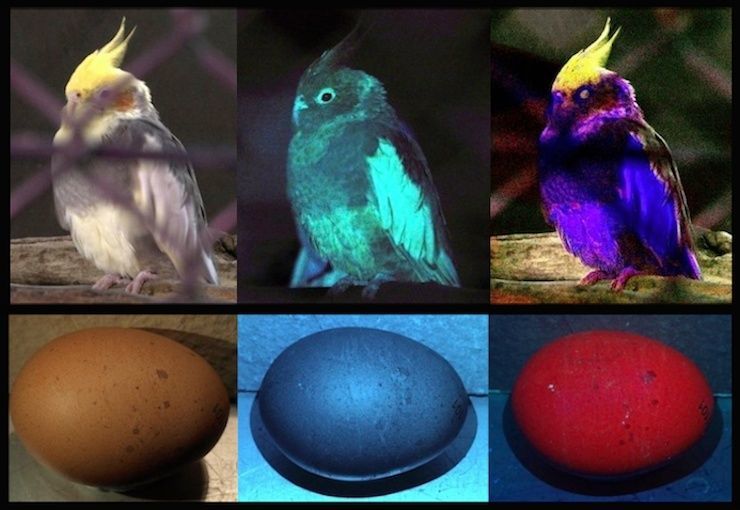 As seen in this picture, the visuals of the game will literally change based on the light wavelength range of your organism’s eyes.

I feel like I’m missing something with this part, so make sure to point out anything I should add. Otherwise, other suggestions for how to simulate vision, or ideas for physical and cognitive properties of the eye are welcome (and kind of necessary, I can’t keep responding to myself on this thread).

Feel free to respond to or discuss either part 1 or part 2.1, since we just moved this thread over. There are also many, many possible spinoff discussions, so we probably will have to make some new threads to carry over the discussion in the future.