Reproduction and Propagation of Species

while helping a friend of mine with his homework, we briefly discussed the qualities of a flower variety that had green flowers located at the base of the plant. This unusual reproductive configuration later prompted me to think about the large variety of propagation methods that we have witnessed in the wildlife of Earth, and how we could reflect similar adaptations in Thrive. As a result, I believe I have brainstormed a potential mechanical use for having different reproductive strategies.

Main Idea:
The main idea here is that Thrive will feature the new species stats: propagation range, and variance.
Propagation range is the species’ ability to spread it’s population. The higher this value, the larger distance it’s population can move through the patch map per generation. Variance is a species’ output of different phenotypes and traits. The more variance a species has, the more a species can settle and adapt to a new region. This could also have a bearing on how different individuals could look, or how well a species would survive certain “bottleneck” selection disasters should they be a thing, or even how often speciation occurs. It will have no effect on a species’ true survivability however. Patches will also have new stats tied to them: Distance, and Habitability. Distance is self explanatory. It is the numeric representation of the patch’s proximity to the player’s occupied patch and will determine if a species can migrate to the patch or not. The further away a patch is, the less individuals will be able to migrate to it. I decided that using a visual indicator would be preferable. I also decided that limiting migrating pop size based on distance would be needlessly complicated for now. Habitability is the calculated ability for a patch to support the species. The higher this value, the higher population that will be successfully transferred upon migration. This value will be determined by a patch’s environmental values (such as heat/pressure) versus a species’ resistance to such values plus their variance value. I would consider hiding variance’s effect from the player to avoid potential confusion, and so the player could use the habitability score to quickly determine how well they would survive an environment.

These new statistics will allow for the introduction of new mechanics for navigating the player’s world through the patch map. Illustrated below is an example of how a simple implementation of a propagation radius. 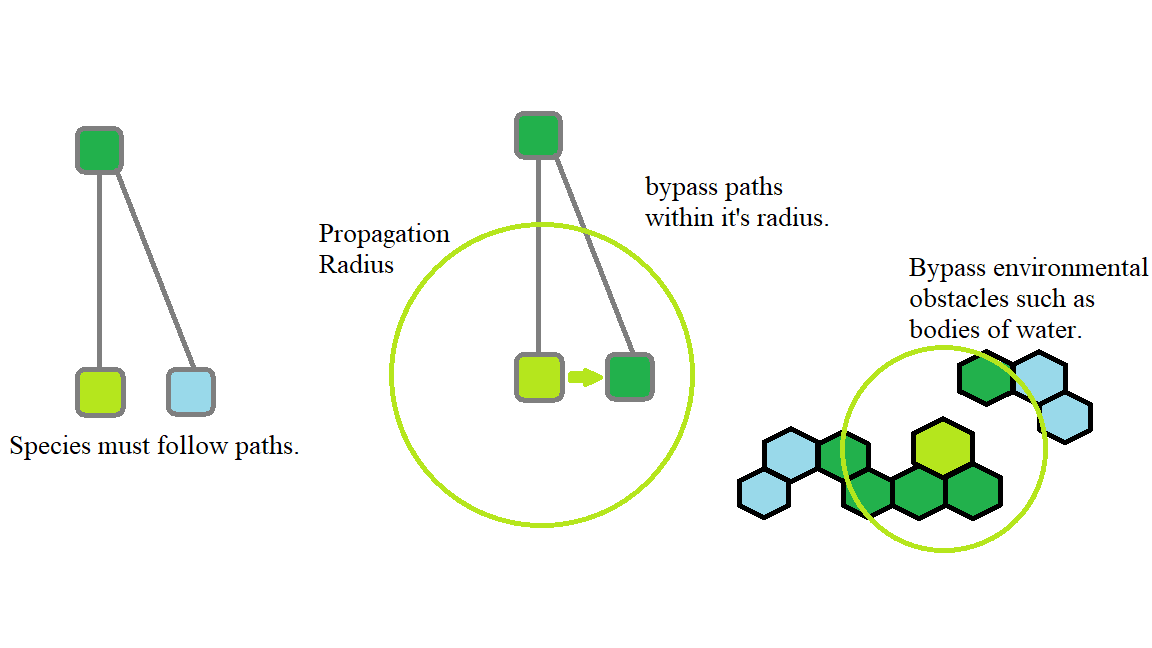 Propagation1152×648 13.4 KB
This radius is a visualization of the species’ possible range of travel determined by it’s ability to move and ability to transfer eggs/spores across distances.

Calculations:
All of these new variables and functions will require calculations to determine their effectiveness and ultimate values. Below I have written a few rough concepts of how we could make them work. They may require significant tweaking should we choose to implement them. (I am unfortunately a poor mathematician so apologies if things could clearly work better another way.)

Propagation radius: S= Speed R= Reproduction bonus P= Prop radius
(S+R)/5 = R Example: (47+20)/5 equals a propagation radius of 13.4.
This is the calculated radius of movement a species is able to perform within the patch map.

Habitability:
This is actually a rather complex calculation that I dont think we will be able to accurately create until we actually implement functional environmental tolerance mechanics. Just imagine a big calculation with a variance score tacked on it somewhere. The final outcome of the calculation should be a percentage. (Peaks at 100.)

Reproduction Methods:
As you can see, a species’ adaptations will play a large role in their ability to travel to new biomes. Species will take large hits to their population size when attempting to travel through inhospitable climates, so they must either avoid these, or endure them. Aside from adaptation to an environment, organisms need a new tool in their arsenal to navigate the patch map.
I believe that reproduction methods would be a great way to allow players to determine how they intend to approach migration and deviation. The biggest change to gameplay reproduction types will have is how your creature engages reproduction. Methods such as sexual reproduction that require two parties, or specific conditions will be harder for the player to fulfill, and so should have higher benefits as a result. The most important stats you will see are Propagation,Variance, population gain, and Speciation. The first two values are used in the calculations above, population gain is a percentage value of how much the species population will increase per generation. (100% is standard value.) while Speciation is a value that determines how likely a new species is to arise from your own. (Again, 100% is standard value.) Below I have listed a few reproductive strategies and their proposed effects.

Asexual Reproduction:
The standard and initial method of reproduction, this will function just as it already does.
Propagation:0
Variance:5%
Population increase: 100%
Speciation: 100%

Spore Release:
A more complex method of asexual reproduction. The individual releases spores that can be carried by wind or currents, and eventually grow into new organisms. Spores are less likely to survive however.
Propagation:15
Variance:0%
Population increase: 80%
Speciation: 100%

Sexual Reproduction:
More complicated than asexual, as it requires the presence of a second party to perform. However, it allows your species to more readily adapt to new ecosystems.
Propagation:0
Variance:20%
Population increase: 90%
Speciation: 150%

Egg Release:
The sexual counterpart of spore-based reproduction. The species will release eggs into the water which are remotely fertilized by males in much the same fashion. This actually will not require direct contact with another individual, but they will need to be around.
Propagation:10
Varience:10%
Population increase: 50%
Speciation: 150%

These stats are rather barebones at the moment, and don’t allow for easy differentiation. Should we ever decide to implement these features, I would certainly like to look further into ways that we could insert strategic value into each choice.
That being said, I hope that this idea bears fruit, and would like to hear what everyone has to say about it!

I was initially against this idea, then I was in favour when I read that this could represent spores and other ways some species could spread farther than normally just moving about, and now reading all of this, I’m again a bit against this idea.

I think that the current model of requiring a species being able to survive in a patch before it can then make another move, is pretty good. Also the patch map should be generated so that if a patch can be bypassed there should be a direct connection, so that your going around lake example would just work so that the patches on the other side of the lake would be directly connected with a land route.

I think that having some kind of spore or hibernation mechanic that would let a species go through an inhabitable patch, would be nice to have in the future.

That’s a fair response. I confess I am not entirely confident about the concept as it is, myself. My primary reasoning for the movement concept is to allow for players to bypass difficult patches that they have no chance to survive in with their current adaptations. (I should mention that I came up with this assuming that the environmental attributes would be implemented and functional.) It would also allow for generally faster movement and species spread within the patch maps, should we get to a point where the game world is rather sizable, it could be helpful to be able to move across the world at high speeds. I should add that if we had seasonal climate and such, this could even facilitate the ability for players to migrate across the world to follow the preferable weather.

I suppose we will just have to wait and see once we get to that point though. As of now, such a complex movement system isn’t really necessary since we currently have a small little game world and rather linear progression of biomes that creates a sense of progression as you move to the surface. I appreciate your input!