Along with the other features we have planned for 0.4.3 I think it might be a chance to introduce some new organelles. Let me know what you guys think of these different organelles and whether it’s viable to plan them for 0.4.3:

Size: 1 Hex
ATP Cost: 1 ATP / second
Requirements: Nucleus
Description: Increases the compounds yielded from engulfment by 50%. The next lysosomes you place increases yield by 25%, then 12.5%, etc. Basically this organelle is what eukaryotes use to evolve towards become specialized towards predating on other cells, particularly be swallowing them via engulfment and digesting them using Lysosomes. It also ties into the Multicellular Stage, since lysosomes will be a common feature of cells specialized towards digestion in a colony.

Also, is it time to start adding in the different environmental adaptation organelles? For example:

I’m not convinced about using a percentage system, that should be used for the enzymes’ efficiency instead.
I think the number of lysosomes should determine how long it takes to digest food so the player can’t access those compounds immediately and has to plan in advance, they basically won’t get a lot of glucose right after eating a cell so they will have to eat beforehand if they don’t want to run out of glucose.

This is my proposal: Lysosomes would generate enzimes like toxin vacuoles, these will be represented in the agents tab and the bar will fill overtime, maybe consuming some short of resource.
Whenever the player eats another cell or marine snow that will fill a bar on the compounds panel, this one could be called Organic Matter or something like that. The more enzymes the cell has, the shorter it takes for organic matter to be processed into compounds basically simulating digestion.
I think this is a good compromise between the former system and eaten cells being kept inside yours, as I said here:

The way it should work is that once you engulf a cell it stays inside you untill you digest it, in turn slowing you, in this case lysosomes would make digestion take shorter.
I think bacteria can’t eat other cells and instead expell digestive enzymes to break down their food.
I think doing something similar could make some interesting mechanics and would make prokaryote gameplay more unique, we should talk about this in another thread if we end up implementing it in the game.

Also bacteria should spew enzimes outside, I’m not sure if they can fagozite as eukaryotes do.
Oh and it could be neat if the cell would need a certain compound to make enzimes, that way we could introduce some short of “crafting system” adding more things to do for the player.

@DonGororo
Your proposition with the digestion enzymes sound very interesting and it could potentially be a fun gameplay addition. I think this idea merits further investigation.
However, I think we should really think twice and thrice before adding a new compound, especially if it‘s only for this function. Distinguishable colors for compounds and/or agents are a percious and limited resource. We would need to assign a color to the enzymes themselves anyways.
We could look into what elements are required to produce digestion enzymes.

Ideally this would be an intermediate step untill we manage to display eaten cells inside others, so there would be no need for a compound bar at that point. We don’t have that many compounds at the moment so i don’t think it’s an issue to add a new one.

PS: Also, Organic matter will only count as a compound once it’s inside your cell, there won’t be any clouds for that so things won’t get too confusing

I’m not convinced about using a percentage system, that should be used for the enzymes’ efficiency instead.

Also, I think it’s important that organisms not be able to digest all of the compounds from food they eat. Realistically digestion is never perfectly efficient, and that’s a theme that runs all the way through the Aware Stage as well, where organisms feed on carcasses but only extract some of the nutrients from them. A common chemical benefit of adaptations to the digestive system in biology were that they increased the yield of compounds/nutrients harvested from food.

Also, a concept image of lysosomes for any artists that want to create concepts or models for lysosomes. 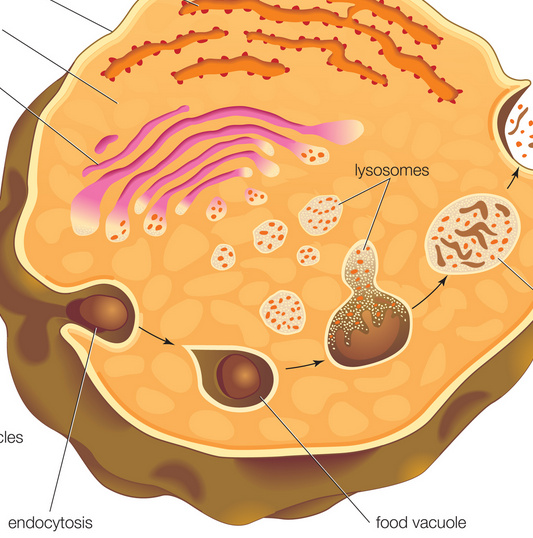 What is the advantage of this system over using percentages? I feel like it’s a little unnecessary to create a new compound as part of this system.

On your system lysosomes will be worth less every time you buy them since efficiency will increase in decreasing amounts while always being at the same price. In my system every lysosome would produce the same enzimes so they would all be worth the same. Having an enzymes bar would mean that as long as it’s filled, digestion would take a fairly short amount of time, and if you run out of enzymes you’ll have to produce more if you want to digest what’s left. On your system i suppose nutrients will be absorbed immediatelly which i guess speeds things up but it’s not realistic and as I said before, i think my idea forces the player to think in advance so they can’t just eat right after running out of nutrients and getting away with it.

I don’t know how the game keeps track of that currently, my guess is that right after eating a cell there would be hidden values of what it’s made of and then, depending on your enzimes’ efficiency (which i guess would be editable once we get around making custom agents), you’ll get a fraction of those compounds.

I agree that digestion shouldn’t be 100% efficient but i also think it shouldn’t be instantaneous and i believe this system can comprise both things, even though we don’t have a way of changing compound and organelles efficiency yet.

But while writting this i realized one thing: a complex digestive cycle should take a lot of time but would garner a lot of nutriets, while a simpler cycle should be quicker and and less efficient.
How about doing something similar with Lysosomes? What if having few lets you access a small fraction of compounds immediatelly, while having a lot makes it take longer but gives you a huge ammount?

(Though to be honest i still want to see an agent bar for digestive enzymes, specially if you can spew them outside)

On your system lysosomes will be worth less every time you buy them since efficiency will increase in decreasing amounts while always being at the same price.

Yeah that’s the point, because adding too many lysosomes would get redundant. Plus the difference from going from 0 Lysosomes to 1 Lysosome is a lot different than going from your 9th to your 10th. It makes it not worth it to stack up on them unless that’s the playstyle you are going for, or because it’s a cell that is being evolved to become a specialized digestive cell in a colony. It’s also because compound yield can never exceed 100%.

The digestion time idea is interesting though, I’m wondering how we could tie it in. I know that phagocytosing cells ingest granules of food and use lysosomes to degrade them over time, but I’m not sure how long it actually takes. It would also likely mean we’d have to simulate some way of showing food being in your cell and gradually being digested.

On a separate note, there are some new organelle ideas that I had been reading about and was interested to see what you guys thought:

A picture of the chemical reaction of Chlorosomes.

I love the idea of making anaerobic variants of organelles!
What new things would Hydrogenosomes bring to gameplay though? Should we give Hydrogen an use so it makes sense to implement them?