Hey all, first thread I’m making in a while! I replayed the game to catch up with what I’ve missed, and wow it’s really progressed. It’s amazing to see new features like the procedural patch maps, the auto-evo in action and the auto-evo explorer tool, and more.

I tried to take advantage of the fact that I’m looking at the game with a fresh lens since I’ve been away for a while, and look at it as much as I can from a new player’s perspective. One thing I realized is that the guts of the Microbe Stage have really been filled out well so far, but there are some gaps in how all the features are brought together and presented to the player. I think there are a lot of small polish features/changes that could be made that could dramatically unlock some of the untapped potential of the game.

One of these is a Mutation Point Modifier. There are several things in the game that grant discounts to your MP cost, so it would be good to have a place in the editor that shows the total bonus/malus you receive. This will be a good foundation for the future when we add further ways to receive a bonus/malus to your MP cost. At the moment the existing possible bonuses I believe are:

Once we have this MP Modifier implemented, here are some future things that I think could affect MP cost:

In summary, look at how such a simple change enables so many big gameplay benefits. There are a few other similar small but foundational changes I also have in mind that I’ll suggest soon (a Reproduction Cost trait, Reproduction Time trait, Phagocytosis Size trait, to name a few).

Good overview of a topic that should be on our minds, and glad to have you back! Skimming through, everything sounds good.

One thing I instantly thought of was genetic lateral transfer, which is an incredibly potent tool for bacteria to utilize as they rapidly adapt to new environmental conditions. The current concept involves having the player receive some sort of an MP discount if they find a plasmid ring floating in the environment. I believe design for that has been relatively polished, it’s just waiting for implementation.

It’s important to note that exploration can also be encouraged by presenting ways to have MP be discounted, which is something Buckly mentioned earlier.

I’ll open an issue about showing the overall MP modifier in the editor:

also would be good to have a tooltip on it explaining what the discount is made …up from https://forum.revolutionarygamesstudio.com/t/mutation-point-modifier/908

For now I can help in terms of concept. Once I get a dev environment set up on my laptop, if no one has taken the task yet I can take on the task of implementing it.

In terms of concept, I was thinking that a good rule of thumb to follow is that the “Multiplier” or “Modifier” version of any stats always have the same icon, but with a percentage sign in the top right corner (taking a cue from the GUI kings over at Paradox). So for example, we know what the Mutation Point icon is, so the Mutation Point Modifier icon would be: 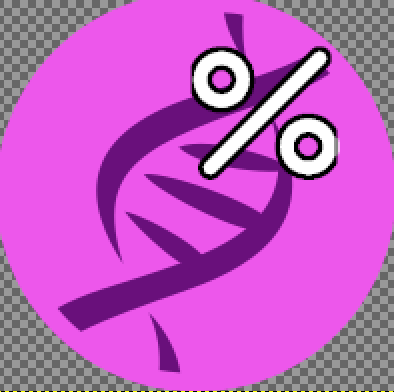 This is just a draft of what it would look like, so any available artist would need to formally create such an icon. Note that I put it in the top right of the circle and not the top right of the entire image, since it looks like all our icons are circles so far so the percentage sign should be aligned to that.

In terms of being displayed in the editor, I was wondering where it belonged best. Since it’s not really a trait per se, I didn’t feel like it belonged in the Organism Statistics tab on the right, and the space beside the MP bar feels already very full, so I figured it could be something placed on the bottom beside the bar for naming your creature, as so: 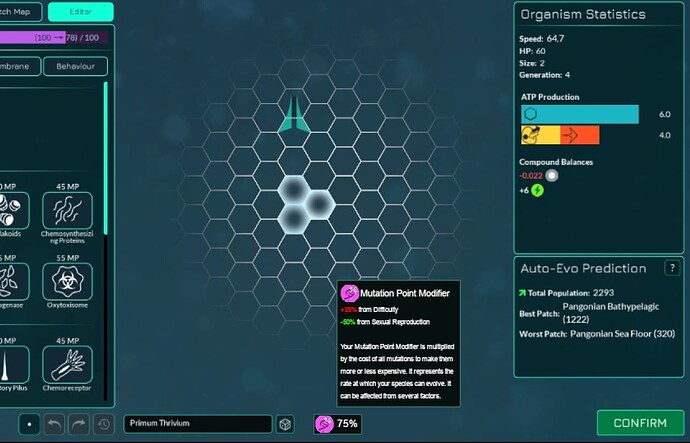 Few notes on this concept:

If anyone decides to take on this task, let me know if there’s anything I can do to help. Otherwise if no one takes it, I can take it once I’ve set up my dev environment, I just can’t guarantee when that will be done.