So organelle upgrades have been discussed a lot in the past, but no finished designs (to my knowledge) have been made. So let’s make a complete design before deciding to include the upgrades in some release.

Here’s an older quote about the upgrades:

As a decision: we’re going to delay organelle upgrades. Lets sort out which organelles we want and get them in the game with models and play with them. Then we can decide as a team if we want upgrades or not. If the game is very complicated already then we don’t want to go overboard however upgrades could also be fun.

We already have a bunch of organelles added, so it is time to make some designs for upgrades as it seems quite a popular feature.

Having a sort of multi-pathed upgrade, or adaptation system could be an interesting and viable mechanic. For instance, giving the player a choice to evolve a pili on their cell from a simple spike to an extendable harpoon, or a toxin-injecting stinger. These “variants” of the organelle could be more effective but have unique drawbacks to their use as well. An example of drawbacks could be consuming a large amount of atp to fire the harpoon, and the stinger not being able to generate toxins on it’s own.

As for the method and UI? I can’t say I’m sure. Personally I would prefer being able to upgrade individual organelles by selecting them, which would show the player the organelle’s current stats and a couple or more buttons to upgrade them to the alternative forms. 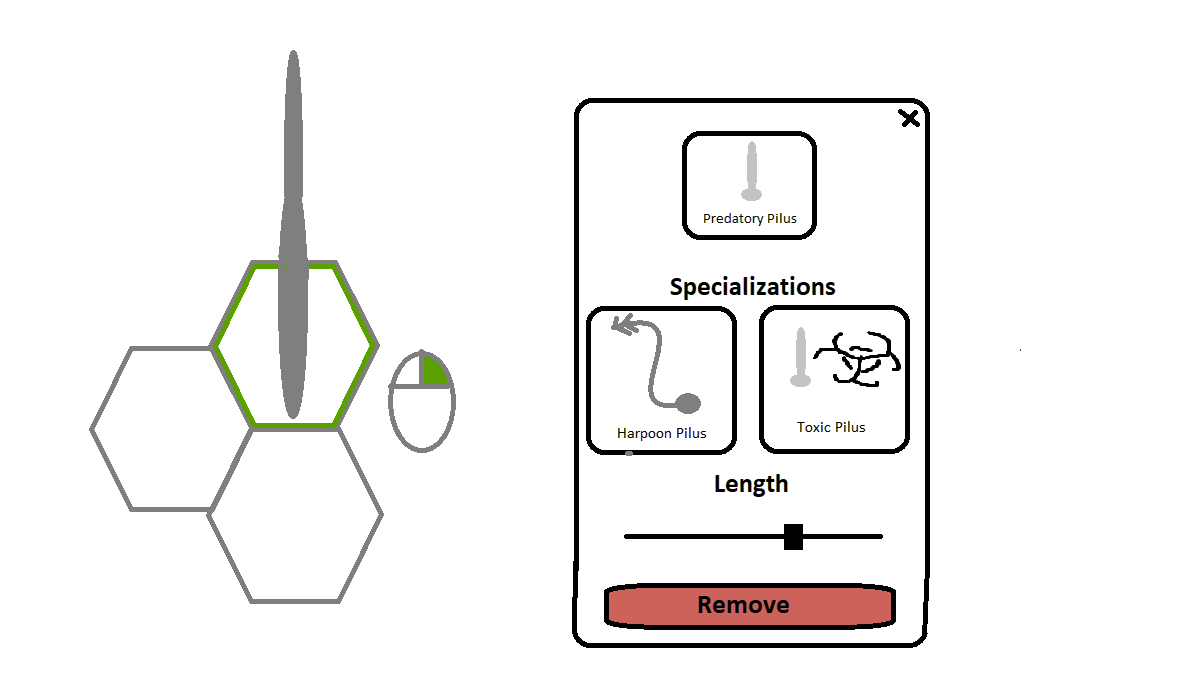 I think could be good solution have left click on organelle instead of right, so remove has no more conflicts.

What about cytoplasm, then? Which you can place an organelle on top of. Would cytoplasm no longer allow placing something on top or would cytoplasm not have upgrades, which would make it work differently from other organelles?

Yes of course we should introduce the fact that click “outside” make left click free, I find kind of weird that when we jump into editor cyto is already clicked. It’s possible to be done?

Maybe I‘m mistaken but I have the idea floating around in my head that at some point we discussed how the different types of pili could be implemented. One option was to go for plain organelle upgrading like in the concept @Buckly made. The other idea was to make the pilus variations by combining the pilus with other organelles. So a pilus with a food vacuole behind it = straw pilus. Pilus with toxin vacuole behind it = toxin pilus. Idk if we actually ever considered this approach or if it was just in my head. But I found this approach to be rather organic and interesting. Although it brings up many difficult questions. How would this option be communicated to the player? How would the AI know how to do this?
I just wanted to have mentioned this. Feel free to ignore this post^^

Players already complain about not being able to move organelles around. With organelles being upgraded by having other organelles placed next to them, feels like it is going to make this problem worse.
So I think that with the current systems it would make things too complicated to have adjacent organelles affect each other.

I like that idea, but as hhyyrylainen said, such a system would bring alot of frustration to the players. However, if we wanted to, we could probably make specialized organelles more efficient or effective when placed beside such parts. That way specific organelle placement would not be locked to the placement of previous parts or be frustrating to those who dont understand it or havent planned ahead up to this point, while still having a positive effect for players who want to plan out carefully.
That being said; This could still bring the same frustration to players if they realized they could get bonuses by planning out placement after already building up their cell. 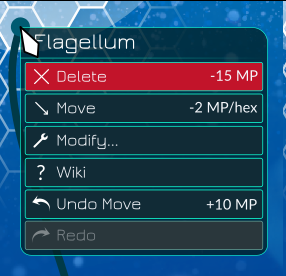 Right clicking on an organelle would open a menu, which puts all the important features related to messing with organelles in one place. (but also means some features may require one more click than they would otherwise. imo that’s alright because organism editing isn’t intended to be super speedy, but rather deliberate) 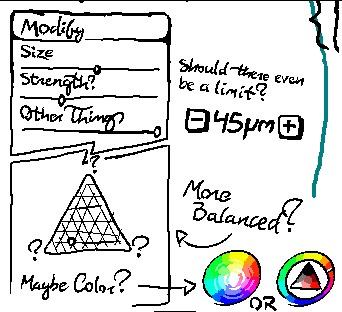 I also made a sketch of the organelle customization menu, and I don’t particularly have much to add there, except why should we restrict organelles’ lengths (and other parameters) to the values we set as the minimums and maximums for the sliders?

In my concept I added a little plus and minus button to let the player change its size outside of those limits, potentially letting them make their pilus/flagella/whatever way more massive than is remotely reasonable. Then it’d be up to auto-evo to decide whether or not it’s viable, or if the costs of growing and maintaining it and maneuvering with it are too great, etc. And if auto-evo decides it’s viable then it’d be pretty cool to see giant cells with giant spikes swimming around

i had a dream once where I was playing thrive and I saw a pack of cells with glassy pili longer than their bodies all swimming in the same direction together, and I got the sense that the pili weren’t a preset part but rather something that was evolved emergently somehow and im not actually going anywhere with this i’m just rambling

I really do like that menu concept, looks very crisp. As for the unlimited customization idea… It’s not something I would have ever imagined being considered, but I actually like the sound of it. Afterall, the only true limits to players should be the viability of their creations. My only concern with it would be the obvious technical and graphical difficulties it would likely present.