tjwhale suggested a nitrogen fixing plastid, it would generate about 0.5 ammonia a second
Do we do it?

Lately I have been thinking about ways we could implement thermosynthesis while making it a unique and interesting method of gameplay.
As you might assume, thermosynthesis seems to be slightly similar to photosynthesis in concept and function. The nature of this relation is most obviously reflected in how thermotrophs in Thrive will more than likely produce scaling amounts of energy based on the ambient temperature of the inhabited patch. I do not want thermoplasts to strictly be a chloroplast that uses heat however, and so the rudamentary proposed stats below will reflect these desires.

Thermoplast:
75C --> 20 ATP, or 0.8 glucose
This is a rather simple exchange, where the cell produces a small amount of energy at optimal temperature. My idea here is that the further your cell is away from this temperature, the less efficient the organelle becomes. Too little heat means not enough energy to work with, too much and it overwhelms and denatures the necessary proteins. Note that these provided numbers are not final, they are intended as a starting point that we can work with to find the optimal values.

I am rather conflicted about what kind of product should be produced by this part. My first choice was ATP as it would create a dynamically different playstyle than photosynthesis, but I fear that it might be unsuitable since unlike iron you wont have any means of storing the energy at all. On the other hand; Glucose is an excellent choice as it will allow the player to survive in cooler areas thanks to their ability to store the excess energy. Glucose would likely require more than just heat to produces however. My only complaint here, and it is rather silly, is that it makes thermosynthesis much too similar to photosynthesis. My instinct is to attempt to make each playstyle as varied as possible, but I shouldn’t let that get in the way so ultimately I will leave this choice to the theorists to decide. I dont believe it is determined what exact products would arise from this process, but I feel they aught to have the final say.

Thermosynthase(?):
75C --> 8 ATP or 0.02 glucose
From what little literature I found in my brief skimming online, a few referenced that thermosynthesis could have potentially been one of the earliest methods of sustenance for early cells. From that I can deduce that prokaryotes would potentially be able to utilize heat much in the same way as eukaryotes, and so I am proposing this prokaryotic variant as a result.
Not much else to say about it really, other that I am rather poor at naming things.

A common idea that has been brought up alongside thermoplasts has been the concept of “hotspots”. Localized zones of higher temperature that could prove suitable for thermosynthesis.
The long standing problem with these however is the difficulty of properly visualizing heat.
My proposal here is that we create models for hydrothermal vents that emerge from the background of the map. These spires would serve as a billowing visual indicator for heated regions, acting as both a hazard, and an energy source depending on your adaptations. These vents would naturally be found in decent quantity within the vents patch, but I believe allowing them to spawn (albeit less often) within the seafloor and abyssopelagic biomes as well would provide for suitable variety. Each vent would radiate a gradient increase in temperature that rises the closer you get to the center, where it would likely be too dangerous for anything to survive. I’m not sure how realistic it would be for there to be vents so tiny, but I feel it would make for an appealing and viable visual.

This sounds really nice. I think there is an issue that if thermoplasts work everywhere then there’s no incentive to use anything else.

In terms of “go near a thing to get energy” there’s this radiotrophy concept we worked on for a while. Not sure if it’s the right thing but it’s there if it’s at all useful to you.

This sounds really nice. I think there is an issue that if thermoplasts work everywhere then there’s no incentive to use anything else.

My intention was for the thermoplasts to only really work best in sufficiently heated biomes. That is, in the vents you would passively get some (very meager) energy no matter where you are because of the high ambient temperature, but in other biomes you would have to solely rely on finding small vents to get your energy, as otherwise the overall temp is too low. These environmental vents would only appear in a couple other patches on the sea floor as well, and not too often.

In terms of “go near a thing to get energy” there’s this radiotrophy concept we worked on for a while. Not sure if it’s the right thing but it’s there if it’s at all useful to you.

Ah I had forgotten about radiotrophy, thank you for reminding me! I’m afraid it hasn’t sparked any new ideas for thermosynthesis in me, but I do have ideas on how the two organelles can be differentiated in gameplay. I suppose I know what I am going to be looking into next!

My intention was for the thermoplasts to only really work best in sufficiently heated biomes. That is, in the vents you would passively get some (very meager) energy no matter where you are because of the high ambient temperature, but in other biomes you would have to solely rely on finding small vents to get your energy, as otherwise the overall temp is too low. These environmental vents would only appear in a couple other patches on the sea floor as well, and not too often.

Did you see the point that was brought up last time thermoplasts were discussed, that they physically should work only in a temperature gradient. Based on that the idea was floated around that the player microbe needs to be between hot and cold water for it to efficiently do something. Related to that a basic implementation was suggested: the thermoplast efficiency is determined based on the temperature difference between the current patch and a nearby cooler patch.

Oh my I must have missed that while scouring the forums for posts about the thermoplast, that certainly complicates things! I suppose I’ll have to step back and rethink this for now, as I dont know much about the details on how that mechanic would work.
Do you know where this point was made? I didn’t see anything on the forums so I assume it was in discord.

It must have been on discord as I can’t find anything related to that on the forums (just that higher temperature is better for thermoplast and that LAWK needs to be off).

Edit: it was confirmed to me that it was on discord.

Alright so I am back at it again with thermosynthesis, and have a new idea on how it could work. 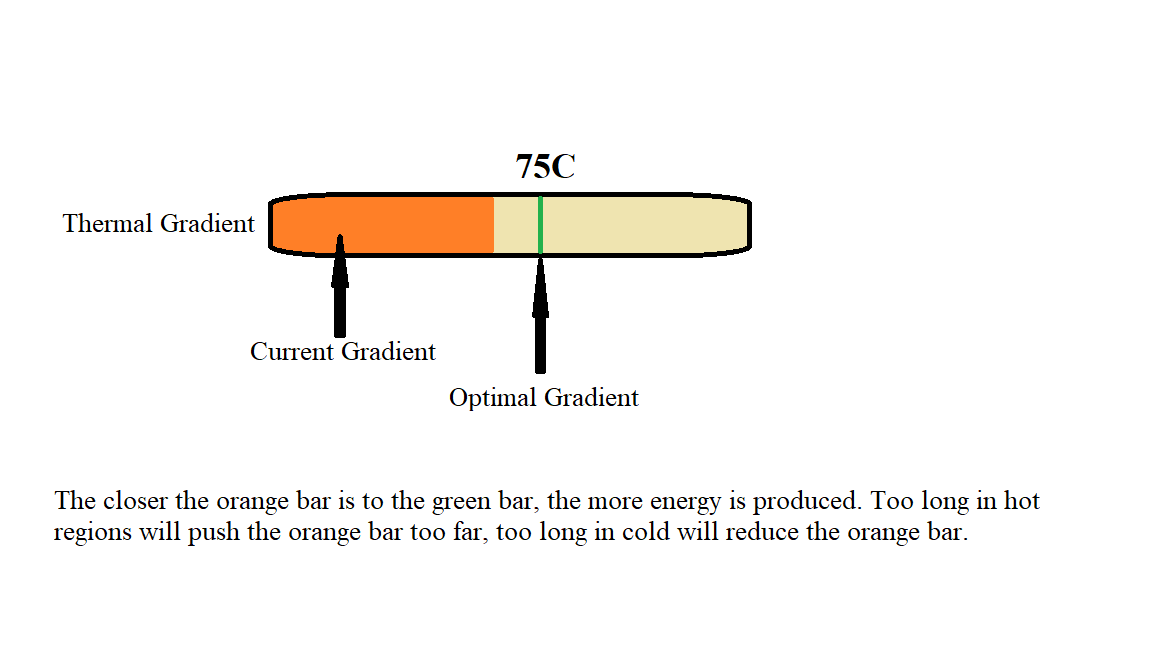 Thermosynthesis1152×648 10.5 KB
Basically, the thermoplast will include it’s own “compound bar”. This bar represents the player’s current temperature gradient (I dont actually know anything about temperature gradients) which they have to fill to as close to the indicator line as they can to obtain optimal energy generation. The scaling for this will work similar to photosynthesis in that the bar represents 100%, and the further away from it you are the less you get.
Being in locations under 75C will not fill this bar and will instead slowly drain it, while locations above 75C will slowly fill the bar. As a result, the player must seek out both hot and cold waters whenever needed in order to maintain their gradient and produce energy.
I would like to know what everyone thinks of this!

Edit: To continue with this, the rate of losing/gaining heat in your gradient will be relatively steady and slow (Something like a 0.01 increase/decrease), hopefully so that balancing the gradient is not a tedious act of traveling back and forward between temperatures. I also went ahead and settled with thermoplasts producing glucose as that seems more likely.
Thermoplast:
0.09 CO2 & 1 gradient = 0.12 Glucose
Thermosynthase:
0.09 CO2 & 1 gradient = 0.04 Glucose
Note that the 1 here means 100% which is the value tied to the position of the indicator line. Being below the line means you have less than 100%, going past the line will inverse the increase and again reduce the percentage of glucose you produce.

Simply placing this updated proposal here so it does not get lost in our developer chatroom. 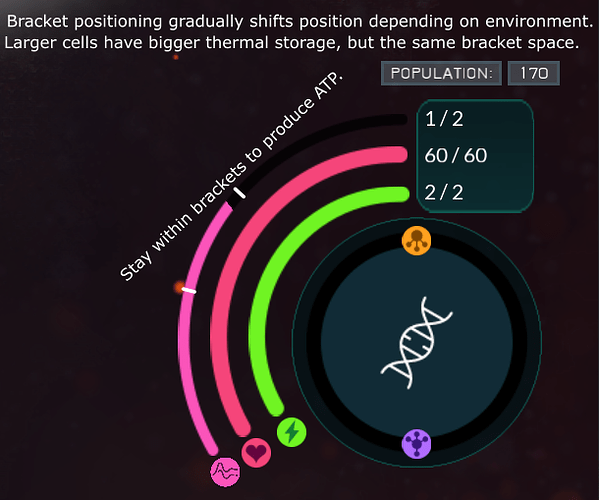 Bracket is based on a percentage of gradient storage.
First bracket at 30% mark. Second bracket at 60% mark.
Goal of the player is to possess a gradient level confined within this bracket. Too much or too little will result in no ATP production.

Since the gradient is mechanically a compound, it shares it’s storage value with everything else. Larger cells have more storage, so they will need more thermosynthesizing parts to maintain their gradient within the brackets which are based on percentage.